This description appeared in the catalog for Christie’s auction at Pebble Beach in 1998. The graphical representation of the catalog pages is © Christie’s and used with permission.

Porsche built the 917 with one underlying goal: to win its first overall victory in the 24 Heures du Mans.

Starting in July 1968 twenty-five 917s were conceived, designed and built in only ten months to meet the FIA production minimum. Those first 25 examples incorporated remarkable technology: Porsche’s first 12-cylinder engine, an aluminum tube space frame chassis, myriad components from titanium, magnesium and exotic alloys, even suspension springs made from titanium wire. Over the next three years the Porsche 917 was to become a symbol of modern road racing technology, an effect far greater than would be expected from only the 37 examples built.

From the beginning, Porsche spent great efforts developing bodies with low aerodynamic drag for the Mulsanne Straight. They succeeded admirably, but on the track the slippery shape proved to be seriously unstable. At a late ‘69 test session which included the first prototype Can-Am 917, they realized the Can-Am car’s chunky high downforce design solved the 917’s stability problems and thenceforth ran two versions of the 917, the 917K (kurzheck, or short tail) and 917L (langheck). The latter were used in racing only at Le Mans. Only five 917Ls, of which this is one, were built, specifically to achieve Porsche’s ultimate goal, overall victory in the 24 Heures du Mans. 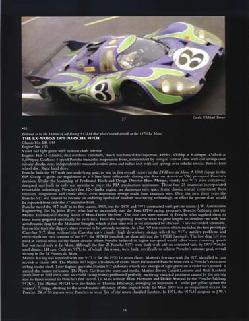 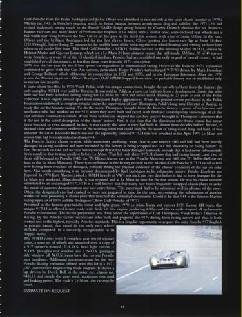 917-043 was supplied to Martini Racing for the 1970 Le Mans classic and began a tradition of exotic livery for certain Porsche team cars. Porsche’s new styling chief, Tony Lapine, gave the Martini 917 elaborate whorls and swoops of light green on a violet background, and earned it the instant nickname “The Hippie Car” from the team and media. Drivers Gerard Larousse and Willi Kauhsen performed perfectly in their supporting role to the factory cars, finishing second to Porsche’s first overall Le Mans winner, Hans Hermann and Dickie Atwood in the Porsche-Salzburg 917K. That Larousse and Kauhsen were playing the tortoise role to the hares of the factory cars and the Ferrari 512s is witnessed by their also winning the Index of Thermal Efficiency, averaging 9.1 miles per gallon against the winners’ 7.4 mpg. It also attests to the low-drag efficiency of the langheck body. In 1971, 917-043, still with the proven 4.9 litre engine instead of the more powerful 5.0 litre twelve used in shorter races, was assigned to the Gulf-Porsche team for Pedro Rodriguez and Jackie Oliver. -043 had revised bodywork owing much to French designer Charles Deutsch (famous for his Deutsch-Bonnet race cars) with a shorter nose, semi-enclosed rear wheels (now 17” wide to better handle the 917’s power and the chassis’ 36-64 weight distribution) and a full-width rear wing between the fins. -043 led the race for 8 hours, setting the fastest lap at 3’ 18.4” (151.854 mph), before falling back in the twelfth hour and retiring two hours later when oil lines added to both their 917Ls by J.W. failed. The third J.W. entry, a 917K, finished second to the winning 917K of Martini Racing, driven by Helmut Marko and Gijs van Lennep. Porsche had accomplished not only its goal of overall victory, it had established overall dominance.

1971 was the last year for the 5-litre sports car regulations in international racing. However the Porsche 917’s reputation continued to grow with the Can-Am version, particularly Roger Penske’s 917/30 driven by Mark Donohue and George Follmer which obliterated its competition in 1972 and 1973. Like the other endurance racing 917Ls, 917-043 was “retired”; its history was re-established only months ago.

It came about like this. In 1975 Vasek Polak, with his unique connections, bought this car from the factory, the only complete 917L ever sold by Porsche. It was sold as chassis 917-044, reportedly the car crashed by Kurt Ahrens in pre-Le Mans tests at the VW test track in 1970 and never subsequently raced. However, in the process of a complete rebuild after purchase from the Polak foundation by the present owner the aluminum tube chassis showed clear evidence of a long racing history … but absolutely no sign of any crash damage. By process of elimination it has been deduced and verified by independent experts’ examination that this is 917-043, the famous psychedelic “Hippie Car” of 1970. That this confusion arose is not surprising; Porsche frequently swapped chassis numbers to satisfy the needs of customs documentation and race entries, making a clear and unbroken chassis history more the exception than the rule.

Presented in its famous psychedelic violet and light green 1970 Le Mans livery and correct 1970-style body, 917-043 as offered is race ready with fresh 5.0 litre engine producing 630 hp. Its origin has been endorsed by independent examination. The recent preparation was done under the supervision of Carl Thompson, Vasek Polak’s long time crew chief, by Porsche-trained technicians who built and prepared 917s during their racing careers and thus is both correct and to the highest, typically Porsche and Polak, standards. 917-043 is the only undamaged langheck chassis in private hands, with a sterling Le Mans history and is instantly recognizable in its hippie livery as well as race-ready and superbly presented in all respects, a unique opportunity to purchase a unique and historic example of the most famous of all racing Porsches.

Click here to return to the top of this page

Click here to return to the Catalog Descriptions index page,

or here to return to the site index page.