This description appeared in the catalog for Christie’s auction at Pebble Beach in 1998. The graphical representation of the catalog pages is © Christie’s and used with permission.

Corvette’s road to Le Mans, celebrated this June with much fanfare, has wound a circuitous trail around the strictures of the 1957 AMA racing ban, passing through back doors and dark alleys. Zora Arkus-Duntov, Corvette’s spiritual father and protector of its concept, was a 4-time Le Mans participant and twice class winner. Zora’s Corvettes kept coming back, quietly testing the Sarthe contest. The first, and best-known, foray involved Briggs Cunningham’s 1960 assault, followed in 1962 by Tony Settember and Jack Turner and in 1967 by Dick Guldstrand’s Dana Chevrolet entry co-driven by Bob Bondurant. By this time Chevrolet’s racing activities were less than a deep dark secret, but still had to abide by the form, if not the substance, of the General’s adherence to the AMA ban. 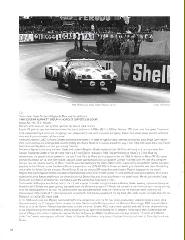 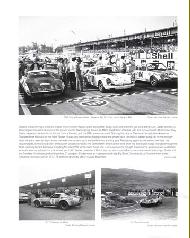 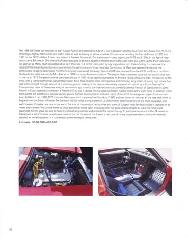 The 1968 Corvette offered here is the survivor of one such not-so-secret effort. The central figure is Henri Greder. Greder nearly won the 1963 Tour de France in a factory entered 427 Ford Galaxie. This earned Greder a Ford of France ride in a 4.7 liter GT40 at Le Mans in 1966 and 1967.The performance of FoMoCo’s 7-liter Mark IVs demonstrated the possibilities of a powerful, but lazy, 7-liter V8 at Le Mans and in preparation for the 1968 24 Heures du Mans GM’s European promotions director (an up and coming Bob Lutz) and Greder approached Swiss racing patron Georges Filipinetti with the idea of entering a two-car Corvette team at Le Mans. Filipinetti accepted and two of the fabled L88 Corvette coupes shortly arrived from Detroit, fully race prepared for the 24 Hours under Zora Arkus-Duntov’s supervision: one (S/N 401300) for Greder and skier Jean-Claude Killy and another for Sylvain Garant and Jean-Michel Giorgi. At the last minute GM vetoed Killy and Umberto Maglioli stepped into the breach. Le Mans 1968 was to be Maglioli’s last race, ending a two-decade career that included a long relationship with Ferrari in both Grands Prix and sports cars, an exceptional Mille Miglia record with Lancia, Ferrari and Porsche and a win in the Carrera Panamericana.

Zora, knowing the demands of 24 hours at speed at Le Mans, fitted very tall 2.56 rear end gears, giving a top speed down the Mulsanne straight of 191 mph and turned in a sub-4 minute lap in testing. The Corvettes were fast, but suffered from what the French called the “ennuis de freins”, its brakes not measuring up to the inertia of 1½ tons accelerated to nearly 200 mph by the puissance of the Big Block L88. Greder recalls having to brake for the Mulsanne turn at the 500 meter mark. 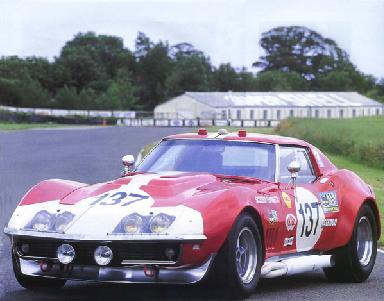 In the 1968 race Greder and Maglioli dominated the Porsche competition until the 6th hour when a carburetion problem melted a piston while leading the GT category. Garant destroyed the other Corvette in the Dunlop curves in the 14th hour. Returning in 1969, now with Reine Wisell as co-driver and Ronnie Petersen as backup, Greder’s L88 Corvette’s M22 “Rock Crusher” gearbox endured 16 hours of downshifting, to use engine braking to relieve the brakes’ “ennuis”, before giving up, again while leading the GT category. Following Le Mans Greder placed 6th overall at Magny Cours then in September reprised the Tour de France, a 5,000km marathon over nine days including 11 events at 9 different tracks. The Corvette was prepared in Greder’s shops in d’Issy-les-Moulineaux using boxes of high performance parts sent to France by Zora Arkus-Duntov.

Despite encountering a constant engine misfire which replacing the carburetor, plugs, wires and even the gas tank didn’t cure, Greder and his codriver Vigneron captured seven of the eleven events (Nürburgring, Rouen, Le Mans, Cap Fréhel, Charade, Albi and le Tourmalet). At Clermont they finally swapped the distributor for one from a Camaro and the L88’s power returned. Starting the race at Clermont Ferrand (then known as Charade) from the back of the field, Greder (“I was very tired, and so happy to have the power back,” he recalls) passed every car on the straight after the start, went straight across the next two corners, spun and backed into a utility pole. Restarting, again at the back of the field, the rejuvenated Corvette (its driver’s enthusiasm unconstrained by the tachometer, which didn’t work after the distributor swap) charged through the field, catching Gerard Larrousse’s leading Porsche 911R at the start-finish line. “Larrousse said he though I was out for good and was so startled when he saw me in his mirrors he almost went off,” Greder remembers. [for enthusiasts of racing history, there is a terrific photo of this moment in Maruice Louche’s book Le Tour de France Automobile 1899-1986, p. 223.] But it was too late to catch Larrousse in the overall standings. Greder and the Corvette finished second and won the GT category.

Greder went on to prepare and race a Big Block Corvette at Le Mans six more times, on this car adding oil coolers for the transmission and differential, culminating in two class wins in 1973-1974, both co-driven by Marie-Claude Beaumont.

Six years at Le Mans, much less consecutive as in this case, is a record unequalled by any single chassis in Le Mans history. Furthermore, the record of the Greder/Aubriet Corvette overwhelms the performance of more notorious Corvettes at Le Mans and opened the door for the enthusiastic reception later teams from the States like Greenwood, Callaway, Viper and GM have received from the A.C.O. and French race fans.

The Greder Corvette was sold in 1989 to Bob Rubin, later to Marc de Peescara and then to its present owner. Still with its original Duntov-supplied L88 engine, with the coil spring front suspension developed by Zora, it is prepared for Historic racing, producing 500+ horsepower on the dyno, with a lightened flywheel, carbon fiber clutch, M22 “Rock Crusher” close ratio gearbox and J56 heavy duty brakes. In addition to FIA Historic Vehicle Identity its documentation includes the original A.C.O. papers from Le Mans. The Greder Corvette 410300 holds a unique place in Le Mans history, not only as one of the most successful, and well-traveled, Corvette race cars in the world but also as the survivor of one of Chevrolet’s “back door” racing programs managed and executed under the direct control of Zora Arkus-Duntov.

The dust of thousands of racing miles and some of Europe’s most famous circuits is captured in its nooks and crannies. Its record of six consecutive competitive appearances at the 24 Heures du Mans, one of racing’s top three events, surely will never be equaled, let alone surpassed. It is a champion, in spirit if not in name, whose history and thunderous L88 will alleviate even the most advanced symptoms of ennui.

Click here to return to the Catalog Descriptions index,

or here to return to the top of this page.