This was a breathtaking transaction.

Estimated at $300-400,000, a determined bidding battle between a seated bidder and a phone bidder (who was in the marquee but disguised his bidding by deferring to a Christie’s bidding assistant) produced one of the most electrifying moments in auction history. The hammer finally fell at $775,000, $852,500 with commission.

There’s a segue at the end of this description.

Jean Bugatti died on the evening of August 11, 1939 while testing the Bugatti Type 57C “Tank” race car on the highway between Molsheim and Strasbourg in Alsace. With him also died the future of the Bugatti marque. 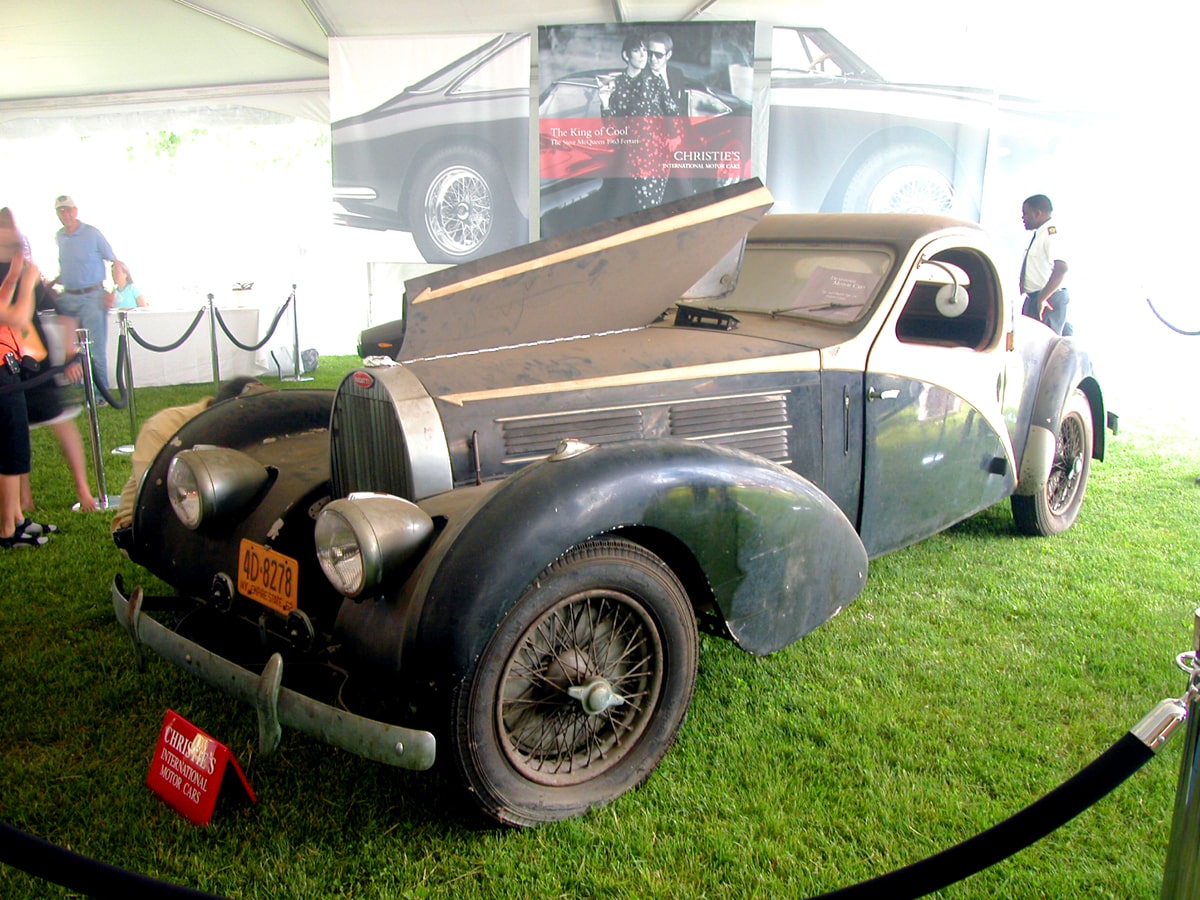 At least as brilliant and gifted as his precocious and talented father, descended from a line of opinionated, creative, driven individuals, Jean Bugatti had already at the young age of thirty established himself as capable, indeed as destined, to build a new generation of Bugatti automobiles on the legacy of his father, the legendary Ettore.

Jean Bugatti grew up surrounded by the fastest and most beautiful cars of their era and counted among his acquaintances their most accomplished and fearless drivers. His family was among the most successful artists of their day. Jean Bugatti was born and nurtured within a milieu of intuitive and aesthetic excellence. He began his apprenticeship in the Bugatti works at an early age, working alongside the craftsmen, artisans, machinists, foundrymen and racing drivers to learn from the inside out every element of building an automobile.

When Jean Bugatti came of age and began to exert his own influence within the walls of Molsheim his experience encompassed every aspect of automobile design: from engines, brakes and suspension to the emerging art of aerodynamic coachwork design and aesthetics. He had worked in the shops and foundries of Molsheim and appreciated the nuances of manufacturing, machining, casting and assembly.

A dual overhead camshaft inline eight-cylinder with cylinders and head cast integrally, the Type 57 was the first Bugatti to have the transmission (a four-speed constant-mesh design) in unit with the engine and employed a single plate clutch in place of Bugatti’s traditional multi-plate unit. The camshaft drive gears were at the rear of the engine, the valves were actuated through finger-type followers. There were five main bearings, plus a sixth behind the camshaft drive. A long-stroke design, the Type 57 had a bore and stroke of 72mm by 100mm for 3,257cc displacement.

In its original naturally aspirated form the Bugatti Type 57 delivered some 135 brake horsepower. Four years after the Type 57’s introduction in 1934 Bugatti introduced the supercharged Type 57C. The Type 57C increased output by at least 25 brake horsepower as well as boosting power throughout the engine’s usable rev range and producing the most powerful and desirable of the Type 57’s several drivetrain variations.

Jean Bugatti sought to move Bugatti’s chassis design into the forefront of Thirties’ technology when the Type 57 was in development, first conceiving a fully independent front suspension using transverse leaf springs as the upper and lower arms. Two prototypes were built before Ettore – by then working almost exclusively from quarters in Paris – heard of it and issued an ultimatum that the new Bugatti should employ a “proper” live axle.

Jean tried again to achieve a modicum of independent action within Ettore’s strictures by proposing a split beam axle but Le Patron quashed even that refinement and the Type 57 employed a forged tubular front axle of traditional Bugatti design throughout its life. In late 1938 Bugatti’s long-favored mechanical brake actuation was finally superseded by hydraulically-actuated Lockheed brakes with twin master cylinders. Aside from the lightweight and effective but outdated live front axle, Jean Bugatti’s efforts had brought the Type 57 to the forefront of performance, specifications, efficiency and technology for its time.

Jean Bugatti’s genius, however, was fully and visibly apparent in the coachwork which he designed for his steadily more modern Type 57 chassis and drivetrain.

In an era when the finest chassis were still regularly clothed by independent coachbuilders, Jean Bugatti had brought the Bugatti coachworks in Molsheim and its counterpart at Gangloff in nearby Colmar to the forefront of elegant, stylish, aerodynamic design. Production – if the term can ever be appropriately applied to Bugatti models – Bugatti designs for the Type 57 comprised a series of handsome styles named after famous alpine passes: Galibier 4-door sedans, Ventoux coaches, coupés and drophead coupés and Stelvio drophead coupés. Elegant, stylish and exclusive designs, they were instantly recognized as limited production automobiles of the finest quality and highest performance.

Even those famous designs were, however, ordinary compared with the exquisite proportions and intricate details of the Molsheim-built Atalante Coupés. Conceived without compromise for high speed transport of only two fortunate occupants, the Atalante’s name – taken from a fleet-footed heroine of Greek mythology rather than alpine landmarks – signified how different it was from the others in Bugatti’s coachwork catalog. Its graceful proportions, steeply raked windshield, extended teardrop front fenders, intimate two-place cockpit, absence of running boards and new elliptical side panel delineation sweeping gracefully from the intersection of the hood’s side hinge with the radiator shell back across the door to end at the bottom of the rear wheel arch projected a light, free, intimate feeling.

Atalante offered little in the way of concessions to practicality. It was the epitome of a Grand Routier, designed for a gentleman and his lady to take advantage of a brief opportunity to get away from everyday life for a respite on the coast, at the casino or in the mountains.

The 1938 Bugatti Type 57C offered here was originally bodied by Gangloff of Colmar with Stelvio cabriolet coachwork for Nicholas Embiricos. Following the war it came into the hands of Ray Murray in the United States who already owned Bugatti Type 57 Atalante 57733, the car displayed in the French Pavilion of the 1939 New York Worlds Fair. Murray then created this car’s current configuration, installing the svelte, stylish Atalante coachwork on the supercharged Type 57C chassis to create the ultimate combination of Bugatti Grand Routier, a supercharged Atalante. Subsequent owners included Al Garthwaite, Dr. Samuel Scher and H.J. Rudkin, Jr. In 1953 it was in the hands of S.J. Rivman and shortly thereafter was acquired by the present owner. 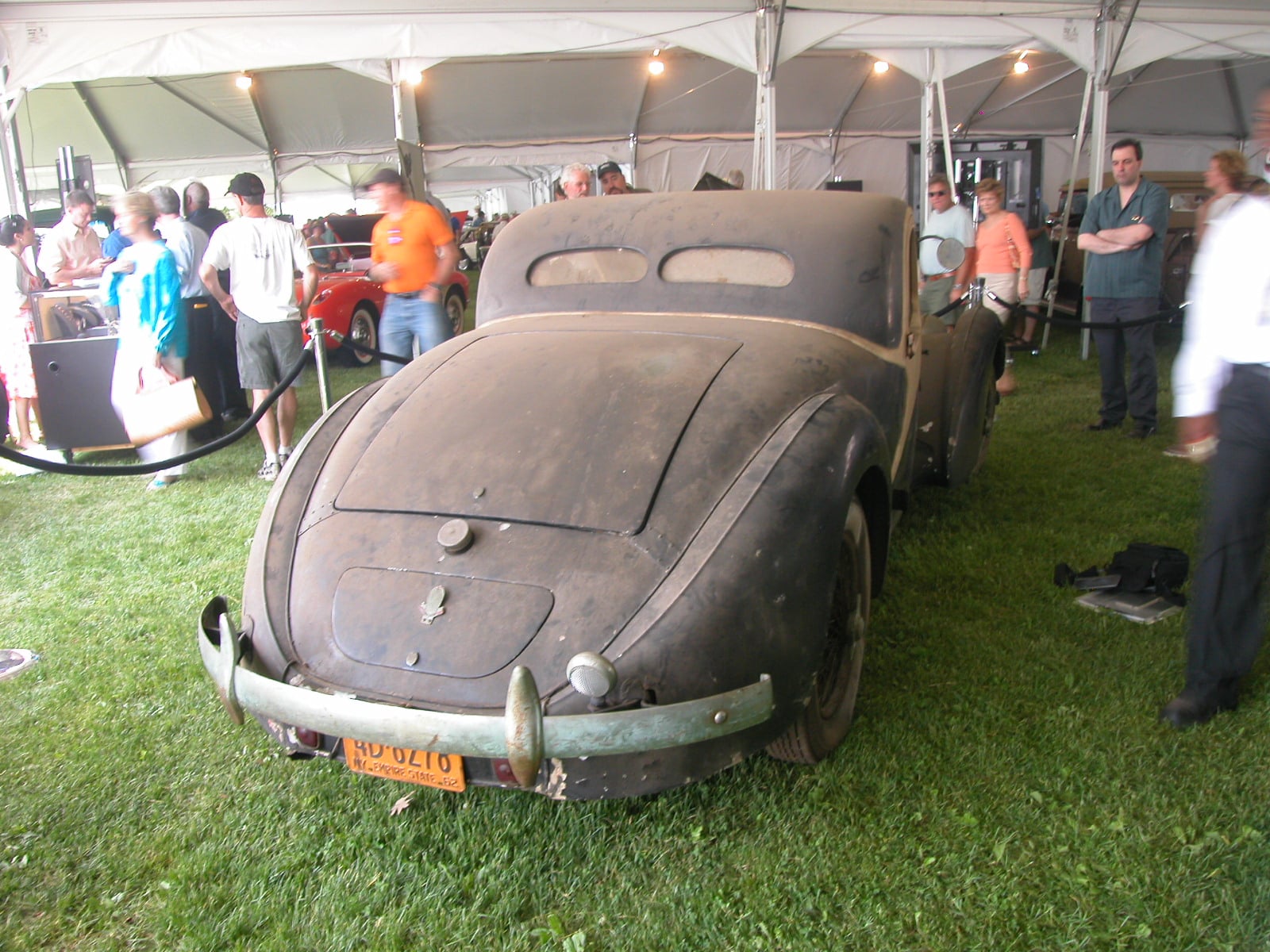 The Atalante Coupé’s original chassis, fitted with the Type 57C’s Stelvio coachwork ended up with Dr. Richard Riddell. After a wreck in 1969 the chassis was parted out by “Bunny” Phillips; the Stelvio coachwork is now on chassis 57600.

One of several important cars in the collection of the current owner, he drove it until about 1962 when it was parked in his garage alongside several other cars. It has remained there, dry, protected from the elements and out of sight, ever since. Its whereabouts were noted in the 1991 revision to the American Bugatti Club Register, although it erroneously noted its engine number as C70 which was actually the engine in the confusingly similarly numbered 57786.

A second series Type 57, Atalante Coupé 57766 has several improvements in addition to the supercharged engine including rubber engine mounts for quieter operation. It is complete and remarkably well preserved, making it the ideal basis for a quality restoration that will return it to the appearance, condition and performance which led Ray Murray to combine its supercharged Type 57C chassis with the beautiful and rare Atalante coachwork and induced the current owner to keep it for more than half a century. It was less than twenty years old when it was laid up and had been owned by a succession of thoughtful collectors who treated it with the respect and admiration which its style and performance deserved. Even at the beginning of the last century’s second half they recognized and appreciated the wonderful combination of the supercharged Type 57C’s performance and Jean Bugatti’s stunning Atalante coachwork.

A new owner now has the opportunity to assume the mantle of these legendary collectors and to give the crowning achievement of Jean Bugatti’s brief but illustrious career the preservation and restoration it so amply deserves.

Sympathetically returned to functional, operating condition by Scott Sargent, 57766 made a memorable appearance in the Preservation class at Pebble Beach in 2007 only a few months after its sale, then was offered by RM Auctions at London in October 2008, bringing $935,468 hammer, $1,029,015 with commission, still exceptionally preserved and superbly original. This is one impressive automobile.

Click here to return to the rickcarey.com com index page.