Peerless started in Cincinnati in 1874 as a manufacturer of clothes wringers, clothespins and washboards. It was an immediate success, so much so that only fifteen years later it had grown to point where it needed larger facilities and access to shipping that Cincinnati at the time could not offer. Combining with the Mercantile Manufacturing Company in Cleveland, the new organization became the Peerless Manufacturing Company.

Peerless was the world leader in laundry equipment, not only shipping its products from its new base in Cleveland but also licensing its designs and name to manufacturers outside North America. Only two years after moving to Cleveland, Peerless perceived new opportunities in bicycles and expanded into the booming field starting in 1891. Success followed but in 1900 it became obvious to the alert Peerless management, by then headed by Lewis H. Kittredge, that the boom in bicycles was over.

The new opportunity was in automobiles. The man the agile managers at Peerless chose to realize it was Louis P. Mooers. Peerless licensed DeDion Bouton designs, building both tricycles and 4-wheeled motorettes with single cylinder DeDion engines. Mooers quickly moved beyond the lightweight DeDion machines, designing a vertical inline two-cylinder engine with the engine in front of the driver and rear wheel shaft drive.

By 1904 Mooers had built a 60hp four-cylinder Peerless for competition by the company’s new driver, Eli “Barney” Oldfield. Called the “Peerless Green Dragon”, it would define Peerless’s reputation for high performance and quality in a series of barnstorming appearances which enhanced both the company’s reputation and Oldfield’s.

Peerlesses also demonstrated their reliability in the early Glidden Tours, setting perfect scores in 1906, 1907 and 1908. In 1907 Peerless introduced its famous slogan, “All that the name implies”, and it worked assiduously at living up to it while pioneering thoughtful, aspirational, elegant advertising and client communication publications.

In 1905, Louis Mooers and Barney Oldfield having decamped to the Moon company, Peerless hired Charles Schmidt from Packard, the designer of the famed Packard Gray Wolf racer. Schmidt moved Peerless into the realm of the six-cylinder engine in 1908, cautiously patterning it after the 30hp four designed by Louis Mooers in 1905. Both were 4 7/8” bore, 5 1/2” stroke engines with T-head valve placement although the six got dual coil and magneto ignition. The duality of components gave Peerless a way to achieve some economies of scale, particularly as its engines used cylinders cast in pairs which bolted to cast aluminum crankcases. The driveline consisted of three-speed manual transmission, shaft drive to the rear axles and rear wheel contracting band brakes.

Suspension was by semi-elliptical leaf springs at the front. At the rear the Peerless used a platform rear suspension: longitudinal semi-elliptical leaf springs at each side which were secured to the frame at their forward extremities and shackled to the ends of a transverse leaf spring at the rear. Platform suspension was particularly popular among chassis designers in the early Teens although an appreciation of its perceived benefits have since been lost.

Peerless offered two four-cylinder engines and one six-cylinder engine on three different wheelbase chassis. It made an appropriate combination of power and chassis available for the ten catalog bodies Peerless offered as well as meeting clients’ needs for appropriate chassis for the coachwork of their choice from one of the major coachbuilders who would create something completely unique. 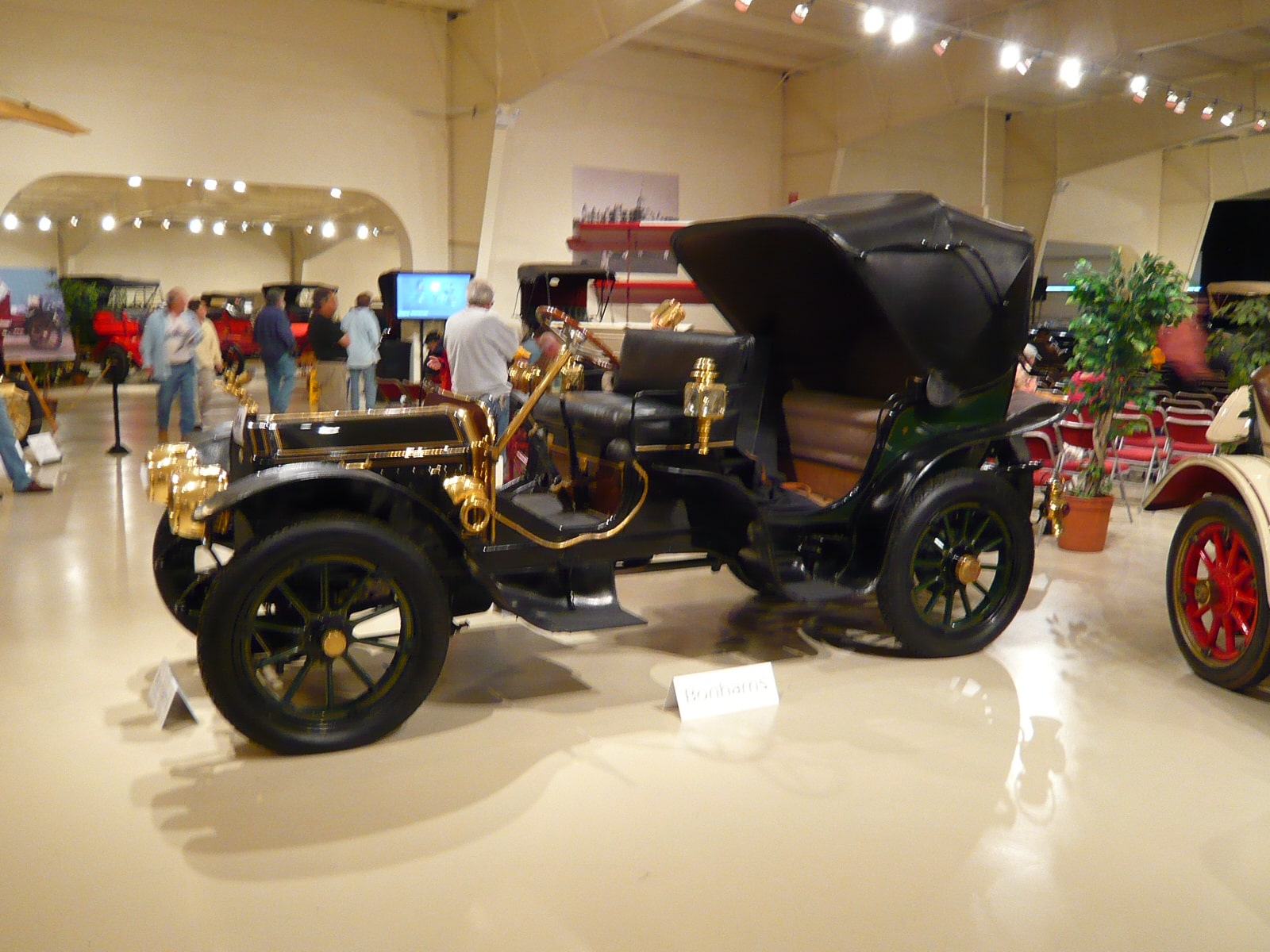 The Paine Collection’s 1910 Peerless is a Model 29, introduced in mid-1910 and continuing into 1911. Its engine is a 25hp four with 4” bore and 4 5/8” stroke on a 113” wheelbase. is custom bodied by one of the foremost names of the day, Brewster & Co. in New York City. The company traced its roots to James Brewster’s early nineteenth century coachbuilding company in New Haven, Connecticut. His sons James B. and Henry had their own coachworks. Henry was followed by his son Willie at Brewster & Co. which was at the turn of the twentieth century the coachworks of choice for New York society. The quality of Brewster’s workmanship was legend and in 1925 it was acquired by Rolls-Royce.

The formal Victoria coachwork on the Paine Collection’s Peerless is an eloquent adaptation of formal horse-drawn coachwork to the new medium of the automobile chassis. The elevated seat for driver and footman are separate, in both place and caste, from the privileged, remote, partially concealed seat in the rear. The style was, as its name indicates, popularized by Queen Victoria and it is one of the most enduring styles of formal coachwork to be applied to a variety of automobile chassis.

This example was acquired by Richard C. Paine, Jr. in the mid-60’s from famed pioneer collector Dr. Samuel Scher who had won an AACA National First Prize with it. Its condition and presentation today endorses the quality of its restoration and its care in Richard Paine’s Seal Cove Museum. While its earlier history is not established as a certainty, research during cataloging strongly supports the conclusion that before it was acquired by Dr. Scher it was owned by another collector whose passion and enthusiasm did much to encourage preservation of antique cars, tenor James Melton.

Melton, in the 1954 book “Bright Wheels Rolling” he wrote with Ken Purdy, pictures his Peerless Victoria which he describes in these words:

“Here’s a different bucket of bolts altogether: a Peerless of 1911 with a Victoria body. For sheer elegance and grace, I know of few automobiles that can match this lively carriage, which I acquired in 1946 from Doris Duke Cromwell [heiress to the Duke tobacco fortune and later married to Porfirio Rubirosa]. I’ll always remember bringing this car home. With a friend, Paul Louis, I had gone to Mrs. Cromwell’s home in New Jersey [the famous Duke Farms in Somerset] to get this car and another Victoria, on a Dodge chassis, and we drove them home across the Jersey Skyway in a pouring rain, I was driving this one, definitely not a wet-weather automobile. I kept thinking of a line I had once seen in a Locomobile advertisement: ‘Nothing is quite as impressive of elegance as an exposed chauffeur.’ Elegant – maybe. But miserable, for sure.”

Later in the book Melton identifies it as “a Model 25 Peerless, six-cylinder, 50-horsepower engine, and cost about $6,000 new. I like to drive it, and I like to ride in the back every once in a while. You get a wonderful cozy feeling tucked away back there!” The Paine Collection’s Peerless is very definitely a Model 29 four-cylinder but none of the three surviving photos of the Melton Victoria show a hood as long as that of a 6-cylinder Peerless. Fortunately a photo in the Melton/Purdy book is nearly identical to one of the catalog photos shot at Seal Cove and West Peterson, Editor of AACA’s Antique Automobile and Graphic Designer of Car Collector Magazine, applied his skills to creating an overlay integrating the two cars in one image. They fit perfectly. 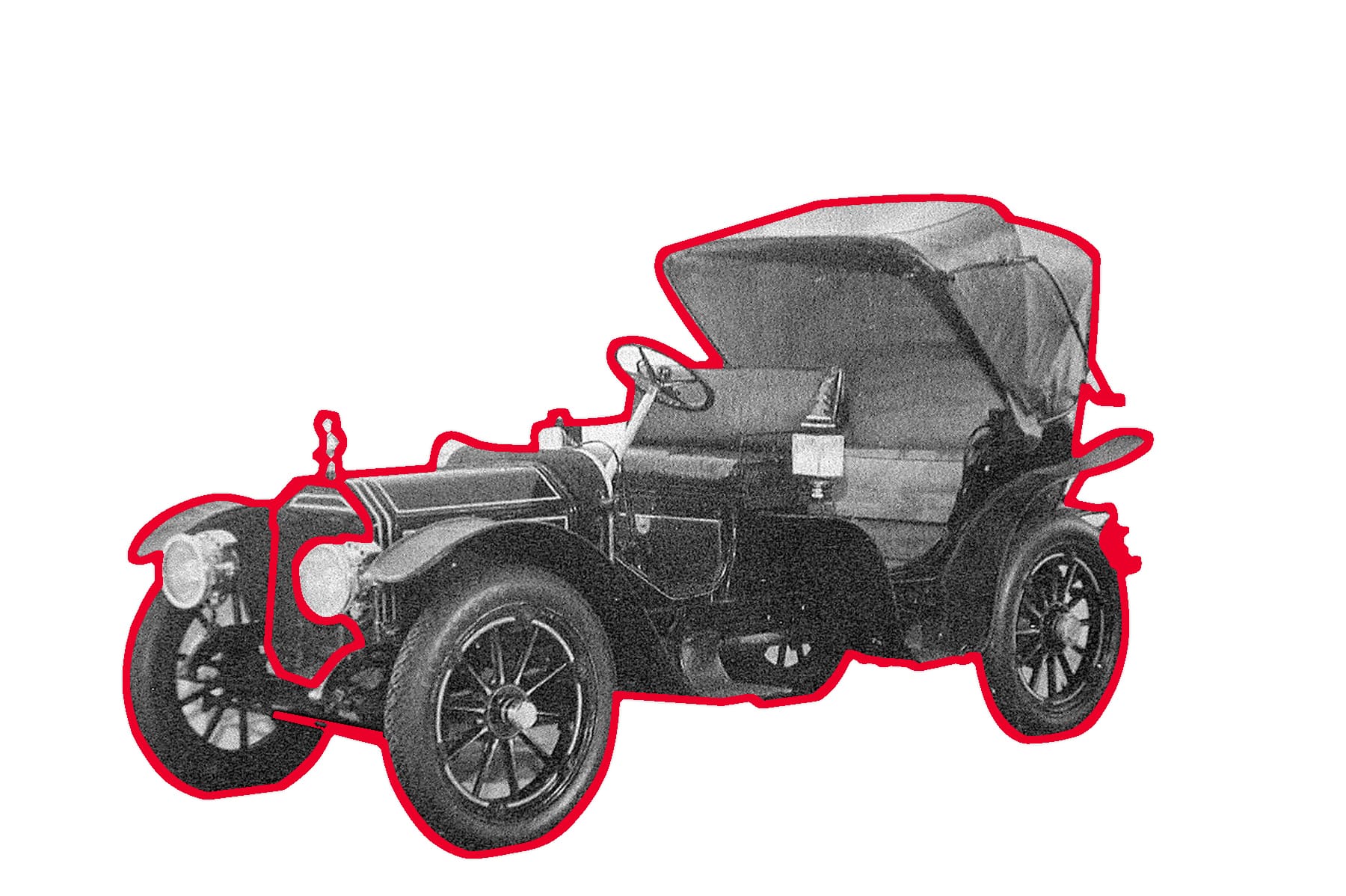 Dr. Scher is known to have purchased cars at the disposition of James Melton’s Autorama, including the Collection’s famed and unique Peugeot Labourdette Skiff. The evidence strongly suggests that the Paine Collection’s Peerless Victoria is the same car that James Melton bought from Doris Duke Cromwell in 1946.

Restored for Dr. Scher, it now has highly unusual and very attractive Peerless-branded acetylene headlights made by Atwood, Dietz Empire Junior kerosene sidelights, an Atwood kerosene taillight and a Peerless bulb horn. The patent leather mudguards are old and have been carefully refinished to preserve the old material with its aged pebbled surface. The Victoria tonneau is finished in Brewster Green and upholstered in Beige broadcloth while the rest of the Peerless is finished in black with Brewster Green wood spoke wheels. The radiator cap is graced by a highly unusual and very attractive brass Pegasus mascot.

Regardless of its history before Dr. Scher, this is one of the most elegant, refined and attractive formal automobiles of the first decade of the century. Built to the uncompromising standards of Peerless, it is an appropriate carriage for the socialite daughter of one of America’s great fortunes. Now restored for one of the legendary early collections and preserved by the Paine Collection for over forty years, its elegance and imposing presence make it a centerpiece for any collection and a welcome participant in the most formal parades, tours, events and concours.

Offered at Bonhams auction of cars from Richard C. Paine, Jr.’s collection at the Owls Head Museum in 2008, this Peerless was estimated at $180-200,000 and quickly shot through the estimate range before being hammered sold to a European bidder at $420,000, $469,000 with commission.

Its significance is as much due to its ex-James Melton, ex-Dr. Sam Scher, ex-Richard C. Paine, Jr. provenance as to its rarity and inherent significance. These collectors were among a few, informed, selective enthusiasts who formed the core of the hobby in the days when these were just “old cars”. Their contribution to finding, preserving, maintaining and restoring rare, high quality automobiles from the earliest days of the automobile have preserved for modern collectors a legacy of history that is too rarely remembered today.

Dr. Scher, whose pioneering restorations set the standards that have developed into today’s over the top Pebble Beach restorations, deserves a whole book, but that’s a story for another time.

Click here to return to the rickcarey.com site index page.