[In an afternoon of dramatic results Mach III followed the pattern, bringing $440,000 hammer ($491,500 with buyer’s commission) against an estimate of $100-$200,000. But, hey, Testa Rossa buyers have thirty-four cars to choose from. There’s only one chance to buy a unique concept like this directly from the car company and even at $491,500 it’s still 1/10th the investment in one of those 34 TRs. Or so the reasoning may have gone….]

Jungle Green Pearl, Grey leather
Instantly recognizable as a Mustang, thoughtfully imbued with Mustang heritage, appropriately updated with future Mustang goodies, tastefully presented as a topless speedster, Mach III was a heck of a Mustang and an eyecatching way to lead into the next generation which would be introduced in 1994. 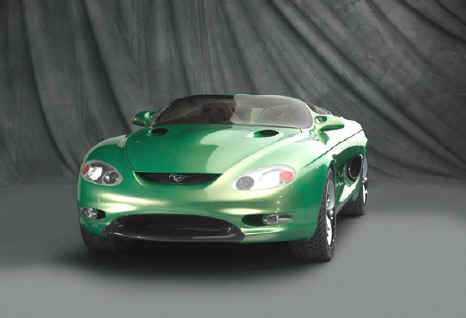 The mechanical attributes were, perhaps, the easy part. Mach III was powered by the 4.6 liter double overhead camshaft V8 introduced in the 1993 Lincoln, a free-revving, lightweight, high efficiency engine no one doubted for a minute would soon find its way into the original Pony Car. Not to give anything away about future production, Ford elected to make Mach III a real powerhouse, fitting a roots supercharger with liquid-air intercooler and dual exhausts to pump the modular V8 up to an attention-getting 450 horsepower, nearly 100 horsepower per liter. They backed it up with a 6-speed manual transmission. A little environmentally sensitivity helps offset the rubber smoke that would be the natural result of all that power so Ford made Mach III fuel-friendly. A sensor in the fuel line detects the alcohol in the M85 alcohol-gasoline mix. The engine management computer uses that information to adjust the fuel-air mixture for maximum power and minimum emissions. The chassis is Mustang’s reliable and proven combination of independent front suspension and solid rear axle with 4-wheel disc brakes.

The Mach III concept’s fiberglass composite body is as special as its powerplant. A true speedster, Mach III has no provision for a top. The nose could be nothing but a Mustang, but with a large air intake under the small Mustang grille (identified by the traditional Mustang emblem) to feed 450hp worth of air to the engine and keep the radiator, taxed by both the engine’s heat and the intercooler load, cool. A carbon fiber-pattern splitter defines the bottom of the intake. Ovoid transparent covers protecting the head and marker lamps are placed above brake cooling ducts. Two large ducts mark the back of the hood, their shape mimicked by the supports for the outside mirrors.

The windshield is low, with a body color frame that dips in the center where the integrated rear view mirror is placed. The windshield frame shape continues to the deck behind the seats which also is an active aerodynamic spoiler containing the center high mounted stoplight. The spoiler rises as Mach III’s speed increases. The rounded tail is flanked by three-bar silvered taillights that give a hint of the lights to come on the ’94 Mustang. The dual outlet center-mounted exhaust pokes through an oval opening below the wraparound bumper. An aircraft-style fuel filler cap is set flush into the rear quarter while the body sides have a prominent channel leading to a carbon fiber-pattern brake cooling duct inlet in the rear fender. Five-spoke chromed 19″ alloy wheels wear P275/40R-19 front tires and big P305/35R-19s at the rear.

Mach III’s interior is done in rough finished heavy Grey hides on fully adjustable and supportive competition-style seats. The driver grips a carbon fiber spoked leather rim Momo steering wheel. In addition to conventional seat adjustment the pedal cluster is moveable over a 3″ range, giving enough flexibility in seat position and control reach to suit almost any driver. Driver and passenger have matching upholstered binnacles separated by a body color center stack and console with a round analog clock and timer pair above a round panel for the 1000 watt AM-FM-CD sound system. The driver’s instruments have black graduations on plain white faces, giving quick readability that will be necessary as the tach spins across its range.

The Mustang Mach III concept was received to universal praise, with enthusiastic tests in the major magazines. One of the magazine tests reputedly pitted the Mustang Mach III concept against a Dodge Viper with the Mach III showing the Viper the way home, however at the time of cataloging we have been unable to locate the article. So popular was the Mach III that most of the major manufacturers of models shortly brought it out in scale.

Offered here, the Mustang Mach III concept is in excellent condition. Originally Poppy Red, it has been superbly repainted in Jungle Green Pearl which exhibits a subtle color shift toward Yellow as light plays over Mach III’s contours. The paint is show quality however the rough finished leather seat coverings exhibit some water staining (perhaps left by a journalist who was startled by Mach III’s performance.) Otherwise the interior shows scant evidence of wear or age.

Click here to return to the Ford Concepts index