[Estimated at $60-120,000, Lagonda Vignale sold for $360,000 hammer ($403,500 with buyer’s commission). That result was, astoundingly, more or less typical of results at the Ford Concept auction, where every important (and some not-quite-so-important) lot brought more than the catalog high estimate.]

Sorrento Blue Metallic, Parchment leather
Perhaps no other concept in today’s sale of exceptional concepts from the Ford MotorCompany has had the effect of the Lagonda Vignale.

Unveiled at the 1993 Geneva Motor Show, the Lagonda Vignale prominently appeared in virtually every important auto magazine and was featured in many general interest publications. It was a sensation. It then toured the spas, watering holes and resorts frequented by its potential market, those willing to consider paying $225,000 1993 dollars for an exclusive, powerful and luxurious motor car.

The Lagonda Vignale united two famous names, Lagonda, since 1947 part of Aston Martin, and Vignale, the famous Italian carrozzeria which became part of Ghia in 1969. It was conceived and built to evaluate the potential market for an Aston Martin-based luxury four-door sedan. In the end it never went into production, a relative term for Aston Martin which might have justified the Lagonda Vignale’s build for a market of as few as 150 cars a year. 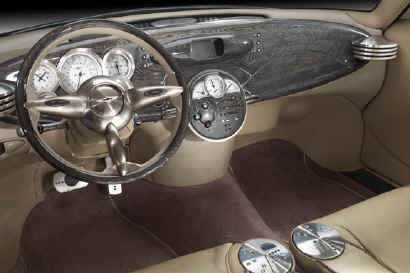 The choice of Ghia for the Lagonda Vignale’s design and construction was a natural fit. Ghia has established a reputation for highly skilled artisans who can design, construct and finish a working concept to the highest standards of fit and finish. Both Aston Martin and Ghia were part of Ford Motor Company which could, in turn, level massive resources and skills at sourcing and modifying highly technical subassemblies to meet the particular needs of the Lagonda Vignale project. Aston Martin Lagonda Executive Chairman Walter Hayes was quoted at the time saying, “It’s wonderful to phone up your big brother and ask him to do the air bags.”

The Lagonda Vignale is a big automobile, 206 inches long, 78 inches wide and 57 inches high on a wheelbase of 122¾ inches. It rides on polished 5-spoke AZE cast alloy 8½Jx18 wheels wearing 255/55ZR-18 tires. The giant wheelbase, 5 inches longer than a Lincoln Town Car, accommodates huge doors. The Lagonda Vignale concept was built on a Lincoln chassis with Lincoln independent front, solid rear suspension with self-leveling. It was powered by the Lincoln’s 4.6-liter V8 giving 190 horsepower and 260 lb-ft of torque. It employed also the Lincoln’s 4-speed automatic transmission but with the added convenience and novelty of touch button control

The 4.6-liter V-8, however, wouldn’t do for the Lagonda Vignale if it entered production. That engine was planned to be the “double-SHO” developed for the Indigo concept, a 6-liter 48-valve V-12 engine capable of being tuned both for substantial power and the smoothness demanded by the ultimate luxury sedan. The production suspension was envisioned as independent all around and a version of the aluminum modular frame developed for the Ford Contour concept (also offered in this sale) was expected to be used for the Lagonda Vignale’s chassis frame.

The Lagonda Vignale’s body was designed by Moray Callum (whose brother Ian also was a Ford designer and had just completed the Aston Martin DB7). It couldn’t be farther from its predecessor sedan, the wedge-shaped mid-Seventies Lagonda designed by William Towns. Towns’ Lagonda was low, sharp-edged and tapered. Callum’s Lagonda Vignale is tall and rounded. There isn’t a sharp edge in sight. Overhangs both front and rear were minimized and the corners viewed from above were gently rounded. The waistline is high, while the windows are short. The balance of masses and proportions minimize the Lagonda Vignale’s size. Exterior ornamentation, and even functional trim, were kept to a minimum to preserve the Lagonda Vignale’s cleanness of line and purity of shape. Only a bright waistline strip extends from the headlights to the taillights.

What little bright trim does adorn Lagonda Vignale’s exterior is done in nickel rather than chrome to take advantage of nickel’s subtle tones. Even the traditional U-shaped Lagonda grille is outlined in nickel. The tail is simply elegant, tapering to a narrow trailing edge with its long taillights gracefully outlining the sides of the deck lid.

Lagonda Vignale’s interior is, in a word, sumptuous. Designed by David Wilkie, its materials were selected by Sally Wilson, who had worked with Taru Lahti on the Ghia Focus (also in today’s sale). Circles abound, in the analog gauges with intricately-marked graduations on a white background, in the seat control panels, in the climate control and sound system control panel, in the air conditioning ducts which look like a stack of silvery records on a changer’s spindle and even in several of the seating bolsters. Like all proper British motor cars, a fine wood finished the dashboard fascia, in this case dark and prominently grained beechwood. The 3-spoke steering wheel, which swings away automatically when the driver’s door is opened, is a combination of leather and beechwood, integrating the driving comfort of leather with the luxury and tradition of wood.

The interior is richly upholstered in soft aniline-dyed Parchment leather. The seats are generously proportioned and fully power adjustable. Like the exterior, all interior brightwork is nickel, complementing the soft richness of the leather and the deep pile wool carpets. Lagonda Vignale’s designers specified that the floor be nearly flat from door sill to door sill, adding to the occupants’ accommodations and ease of entry and exit. In the rear power-operated desks are provided for both occupants. One is fitted with a laptop computer while the other has a complete vanity.

The Lagonda Vignale concept’s body is constructed from composite materials. The door latches operate electrically and the plexiglass side windows appear to be fixed. Lagonda Vignale’s fit and finish are typical of Ghia’s work, impeccable. The doors function well, although at the time of inspection the righthand front door outside switch was not operating. As a concept created to demonstrate features at shows Lagonda Vignale is fitted with its own built-in battery charger working on both US and European voltage. Various electrical systems are functional including the driver’s and passenger’s seat adjustment, the demonstration navigation system (through a built-in VCR) and AM-FM cassette (but not the CD player), hood, trunk and gas cap releases. The rear seat reading light switches, center armrest and tilt functions are operational and are controlled from an overhead console.

Befitting its expense and the efforts expended on its creation, the Lagonda Vignale concept is in excellent cosmetic condition, showing little evidence of wear, use or age.

As an exemplar of luxurious and competent motoring, the Lagonda Vignale concept is without peer, a beautifully constructed presence that is instantly recognized and appreciated by audiences worldwide.

Click here to return to the Ford Concepts index.