[Estimated at $15-25,000, Saetta led off the Ford Concept auction and brought $50,000 hammer ($58,750 with commission), setting the pattern that was to continue throughout the sale of beating — and in some cases vastly exceeding — the catalog high estimates. In fact, by the standards of later lots in this sale, Saetta was a relative bargain!]

Electric Blue, Aluminum and Matte Dark Grey inside and out
Ghia Saetta is a bold and iconoclastic roadster based on the Fiesta platform using carbon fiber exterior panels. Strongly shaped in Ford’s “New Edge” style, characterized by hard edges, geometric forms and straight lines, Ghia Saetta makes a very loud statement of sparks, bolts and shocks consistent with its name, “fast as lightning” in Italian. 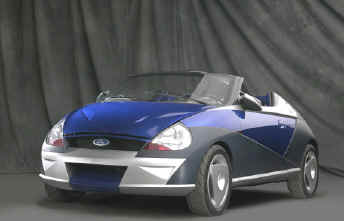 While the basic shape consists of simple arcs Ghia Saetta juxtaposes bold contrasting geometric forms that breathe busy life into its beetle-like form. Dark Grey, Silver and Electric Blue suggest the clouds, rain and lightning bolts of a summer’s storm. Ghia Saetta isn’t just a rolling canvas, either. It features a central spine arcing from the center of the windshield header to the deck where it terminates in an assembly that resembles a power pole gusset, a creative combination of artistic yet functional structural support.

The interior of Ghia Saetta is as taut and tense as its exterior, carrying through the brilliant contrasts of color and texture and repeating the exterior’s triangular shapes.

Filippo Sapino, Ghia’s managing director, explained Ghia Saetta’s shock value in these words, “Our speedster concept explodes the myth that it’s necessary to put a soft radius on everything to create an aerodynamic form: bold and inventive interpretation opens up exciting new possibilities.” 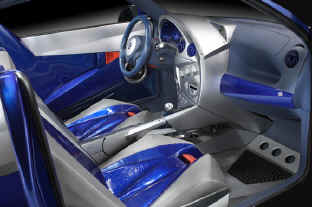 Ghia Saetta was created by an international team of young designers at Ghia led by Camilo Pardo. His next job was leading Ford’s Living Legends Studio in Dearborn where the first project under his management was the new GT40. It would seem Ghia Saetta was not the only thing that caught management’s attention.

Built on the Escort platform, Ghia Saetta has remote entry doors and 205/45R-16 tires with custom tread patterns. The wheels have plastic full wheel covers. The exterior is in good condition but the translucent finish Electric Blue inserts on the seats have surface cracked badly.
Ghia Saetta is a wakeup call, both literally and figuratively.

Click here to return to the Ford Concepts index.