It was with great fanfare that Artcurial Motorcars announced this single owner collection in late winter of 2020, scheduled for May 2 on location in the Mid-Pyrenees. The location was convenient to nothing, but promised to be delightful in the spring.

CoViD-19 put paid to that shortly after the auction was announced. The auction went on hiatus along with much else and was eventually rescheduled for late summer. It had to be an on-site auction: many of the lots comprising the last of M. Trigano’s collection were firmly sunk into the ground of the Pyrenees. Others were stashed in dusty warehouses in non-running condition, frequently missing bits and pieces (or more) that rendered them stationary.

There were dauntingly challenging projects, but among them were many sound, if long stationary, and highly desirable marques and models. André Trigano is a man of catholic automobile interest, and it showed in the collection.

Notably for a European auction, many of the cars were American. Some were ordinary. Others were exceptional. A few were low mileage survivors. Some brought eye-opening prices.

Single owner collection auctions frequently bring milestone prices. The provenance lends its own value and bidders sometimes become disoriented when faced with a dusty, neglected relic for which they have no experience or reference points, like obscure American cars in France.

That was seen many times with the André Trigano collection as prices soared through the pre-sale estimate ranges.

Originally presented as a “No Reserve” auction several of the more expensive lots were amended with reserves at the auction, understandable due to the rescheduling and uncertainty of the times. They are noted in the following descriptions, and it didn’t make any difference since everything sold.

The reports here are based on online photos and Artcurial Motorcars’ honest and thorough descriptions.

Photos are © 2019 Peter Singhof, courtesy of Artcurial Motorcars. If Peter could just convince the catalog Art Director to include just one wide front ¾ view from eye level instead of shooting upward from a dramatic ground level vantage point it would conform with the way we actually look at and perceive the cars. 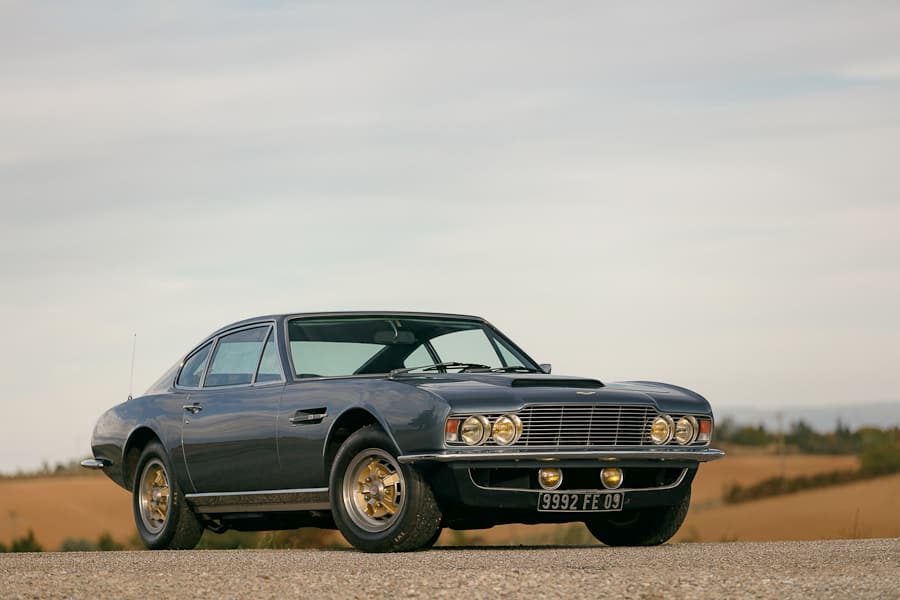 Lot # 124 1970 Aston Martin DBS V8 Coupe; S/N DBSV810106L; Engine # V540083; Sky Blue Metallic/Black leather; Estimate $106,479 – $153,803; Visually maintained, largely original 3 condition; With Reserve; Hammered Sold at $183,381 plus commission of 17.00%; Final Price $214,555. – 5,341/350hp, Bosch fuel injection, 5-speed, alloy wheels, Michelin XWX tires, Autovox cassette stereo, factory air conditioning, power windows, fog lights. – Andre Trigano Collection. Sound older repaint, good original upholstery with creases and surface cracks. Orderly engine compartment. Sound and complete but showing age and storage in the dirty carpets and footwells. Door dents and chips on the right side, particularly the rear fender. Mostly original except for the mediocre repaint with 23,529 km and two owners from new. – Cataloged as No Reserve but updated online and on site to sell with reserve. Titled as CBSV810106L. According to the seller the first owner never drove it and the 2,000km on the odometer when he bought were Paris-Nice-Paris miles when it was delivered, then returned to the dealer. Its condition is not as good as might be expected, but the price it brought is exceptional, a combination of known odometer reading, charming originality and the 5-speed gearbox. 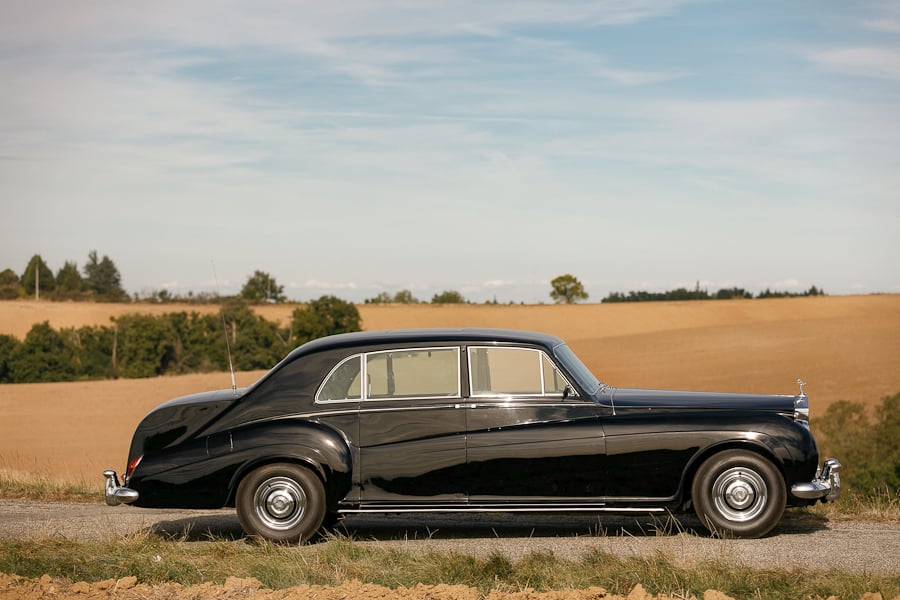 Lot # 133 1962 Rolls-Royce Phantom V Limousine, Body by James Young; S/N 5LCG67; Engine # PV33C; Black/Biscuit leather; Estimate $118,310 – $177,465; Unrestored original 3+ condition; With Reserve; Hammered Sold at $177,465 plus commission of 17.00%; Final Price $207,634. – 6,230/200hp, automatic, air conditioning, rear seat sliding sunroof, side window rollup shades, exaggerated trunk, power division with rollup shade, picnic tables, jump seats, AM-FM front and rear, underdash 8-track, rear compartment clock and speedometer, Marchal headlights – Andre Trigano Collection. Sound but aged original paint with polishing swirl and some chips at panel joints. Good original chrome and upholstery. Very good and abundant interior wood. The exaggerated trunk is practical, but ruins the otherwise subtle James Young lines. Described as bought new by fashion designer Charles Jourdan, later by singer Charles Aznavour. Original throughout and shows 56,505 km on the rear compartment odometer. – Cataloged as No Reserve but announced on site and online as having a reserve. Perhaps Charles Jourdan ordered the big trunk to carry samples? In any event this is probably a unique car, lavishly equipped and well-preserved for which a generous price was paid at the top of its pre-sale estimate range. It is far too good and maintained ever to be restored. 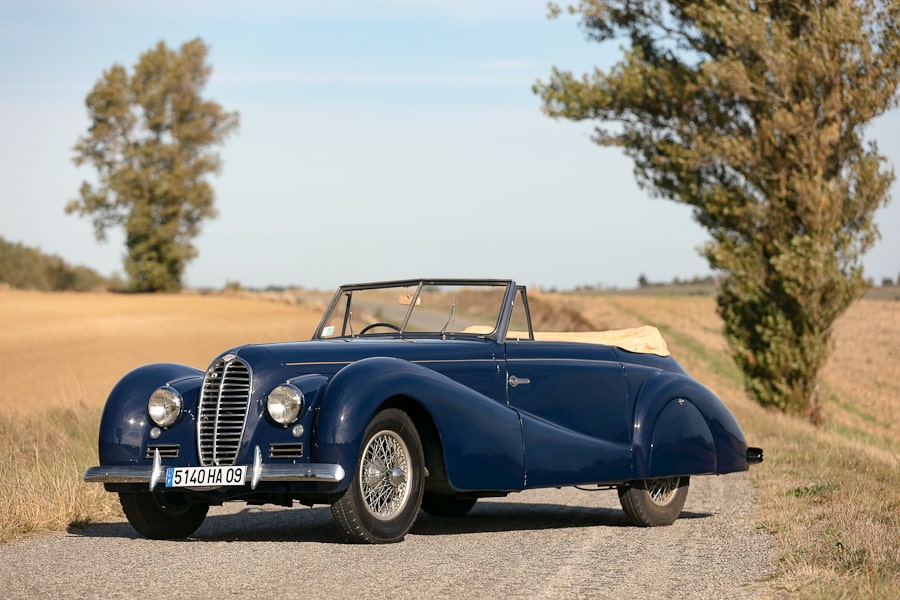 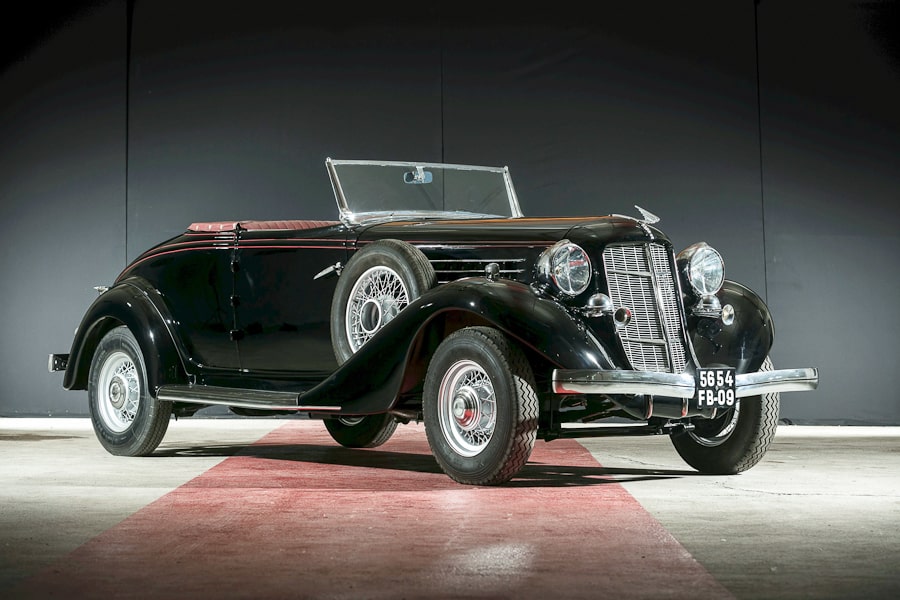 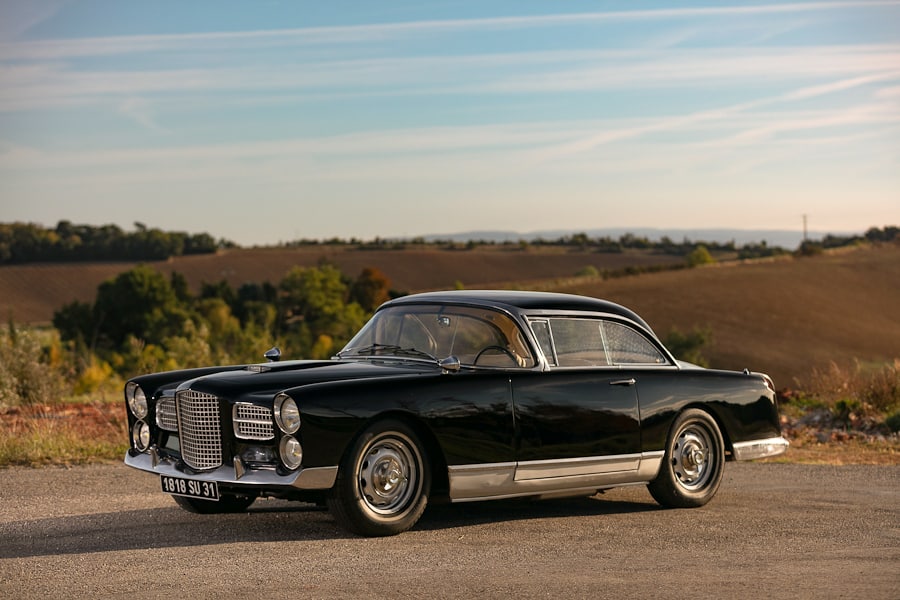 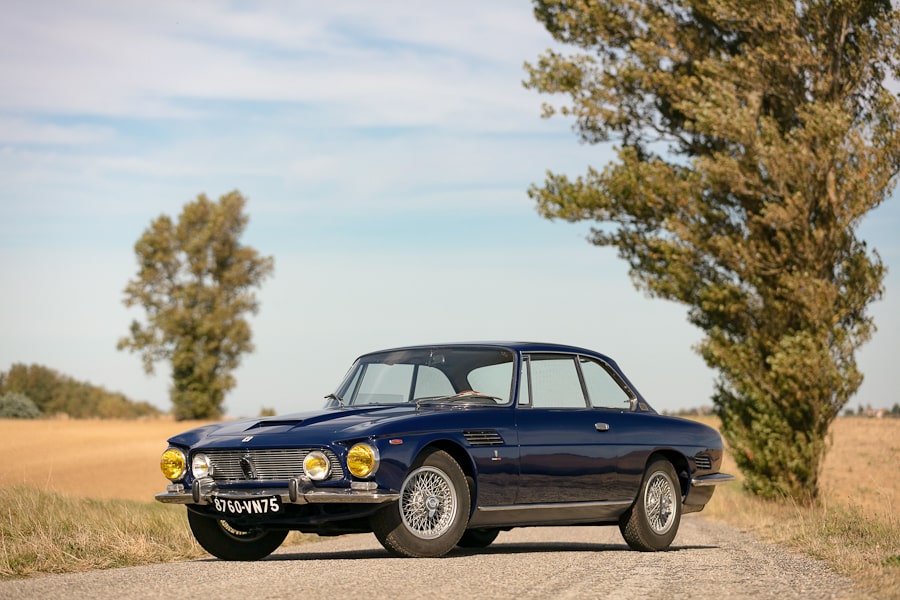 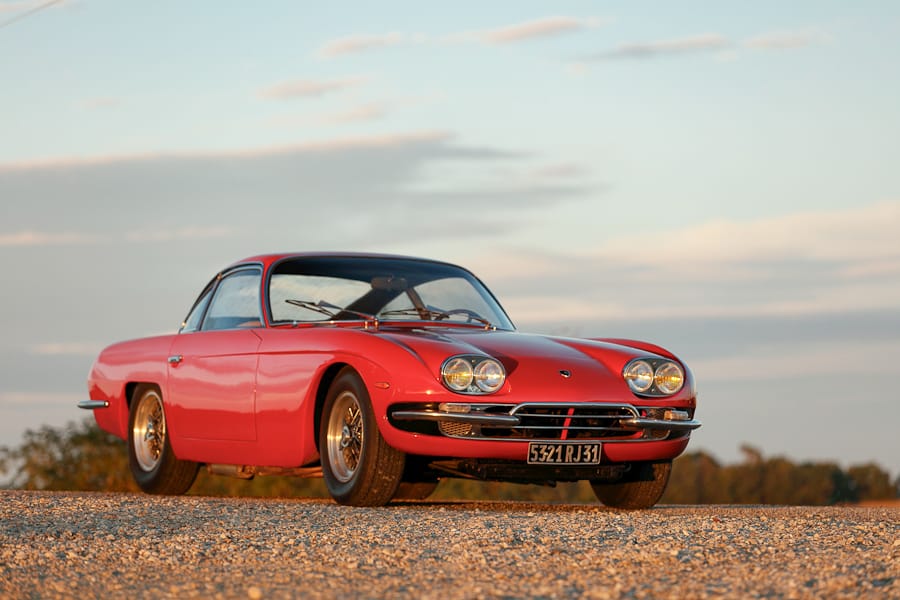 Lot # 182 1967 Lamborghini 400 GT 2+2, Body by Touring; S/N 01231; Engine # 1364; Red/Tan leather; Estimate $473,240 – $709,860; Visually maintained, largely original 3+ condition; With Reserve; Hammered Sold at $473,240 plus commission of 17.00%; Final Price $553,691. – 3,929/320hp, six Weber carbs, 5-speed, chrome spoke Borrani wire wheels, Hellebore woodrim steering wheel, power windows, Blaupunkt radio. – One owner from new, 33,745 km, all original components, Andre Trigano collection. Sound older repaint from the original Amaranto, very good original upholstery and interior trim. The trim chrome is sound but some elements like the door handles are beginning to flake. The engine compartment is very neat and tidy but the chassis and underbody are dry and largely original. Unlike many of the Trigano cars this one runs, drives and stops but still an inspection and recommissioning are recommended. – Originally cataloged as No Reserve, a reserve was later applied, not that it mattered very much when this combination of single ownership. modest mileage (about 21,000 miles) and preservation came on the block. Its history makes this a special example and the bidders paid up for it although there is little room at this price to address even its small number of issues. 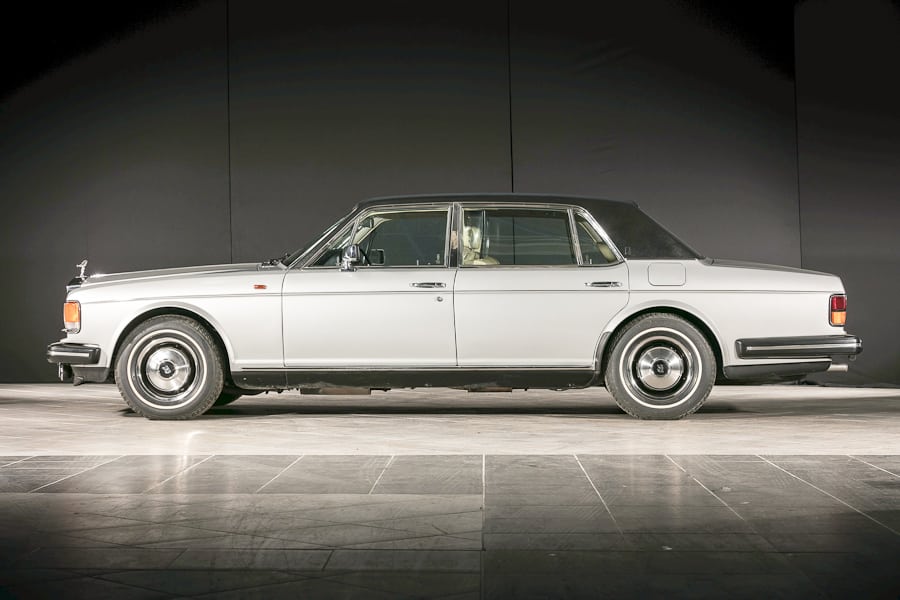 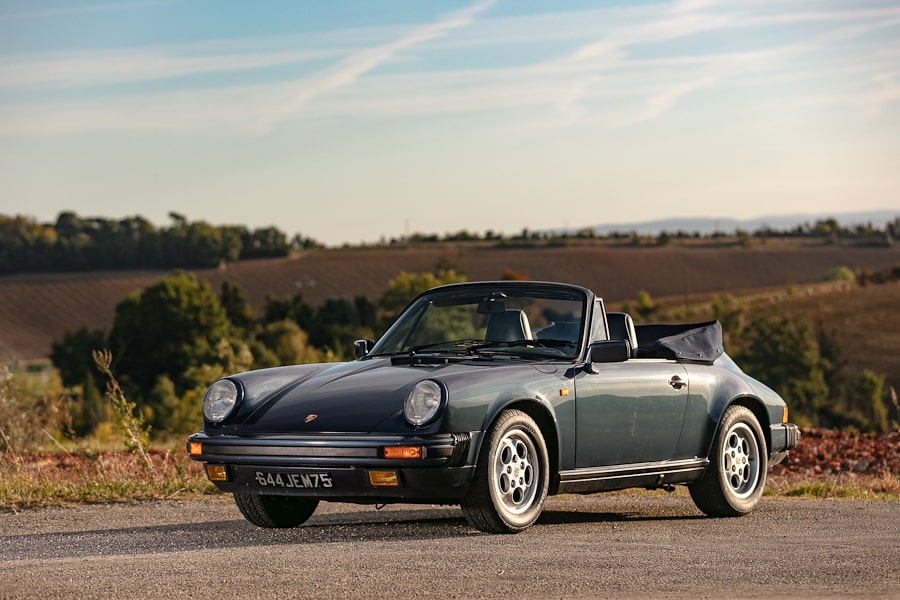 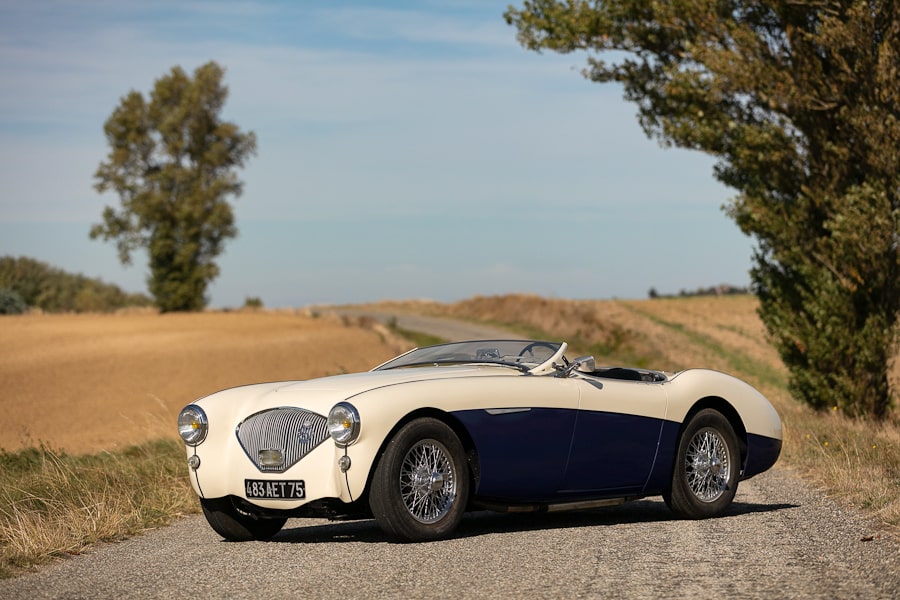 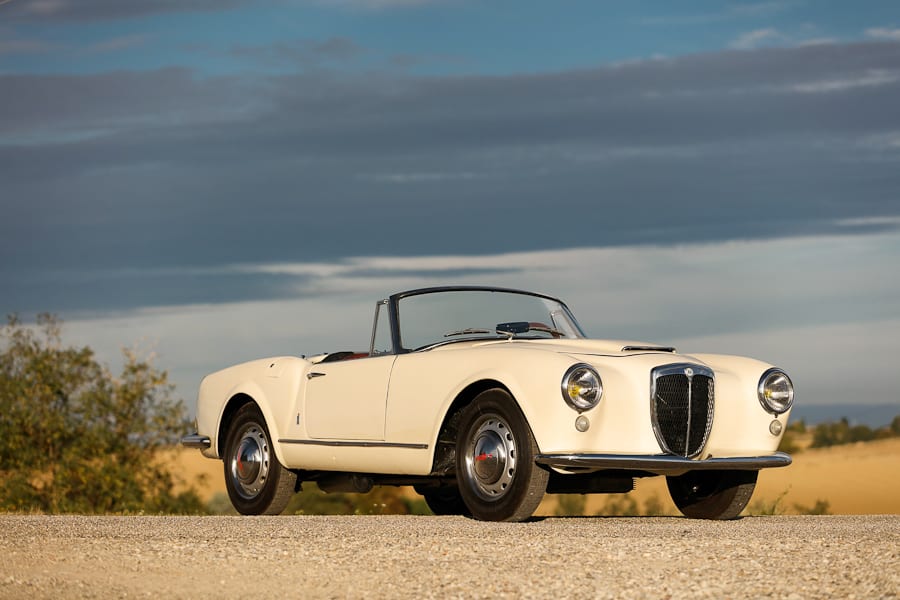 Lot # 219 1957 Lancia Aurelia B24S Convertible, Body by Pinin Farina; S/N B24S1374; Engine # B241496; Ivory/Dark Red leather; Black cloth top; Estimate $236,620 – $295,775; Older restoration 3+ condition; With Reserve; Hammered Sold at $236,620 plus commission of 17.00%; Final Price $276,845. – 2,451/110hp, Weber 40DCL carburetor, 4-speed, silver steel wheels, Michelin X tires, woodrim steering wheel. – Andre Trigano Collection. Good older paint and preserved and original upholstery with abundant patina. The engine compartment has been restored but now is aged with paint loss and some fluid residue. Chassis and underbody are orderly but aged. The rear fenders have been modified for Fiat 1500 Spider taillights and they look like they belong on the car. Restored some time ago in the Trigano workshop and now a competent driver although it will require recommissioning before enjoying it on the road. – Originally cataloged as No Reserve, updated online and at the auction. This result is a sound value even though purists might be put off by the Fiat taillights. Values of Aurelias, both the expensive Spider America and the comfortable Convertible, have tapered off noticeably since peaking around 2015 and this is an appropriate result in 2020. 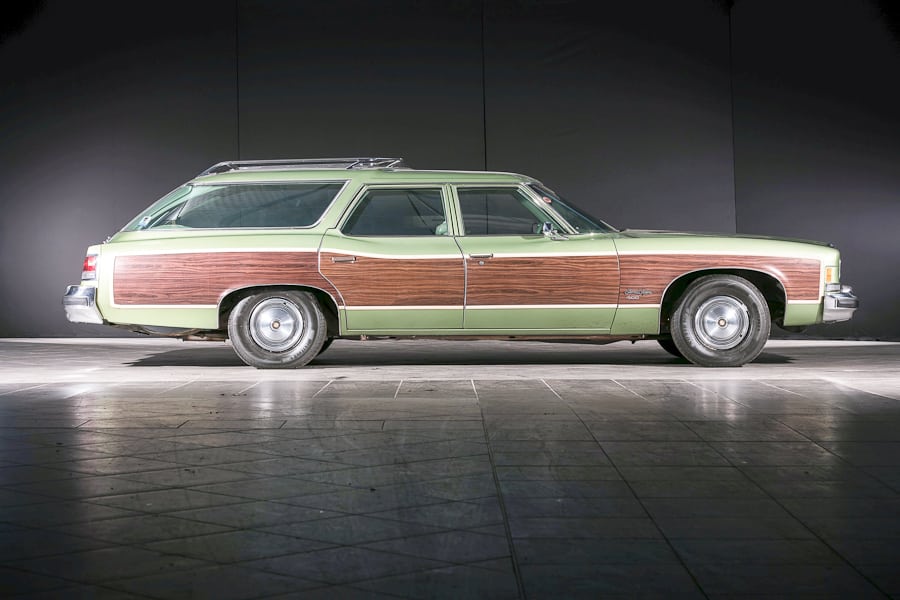 Lot # 233 1973 Pontiac Grand Safari Station Wagon – 9 pass.; S/N 2P45W4X102469; Slate Green, Woodgrain applique/Green vinyl; Estimate $7,099 – $11,831; Unrestored original 3 condition; No Reserve; Hammered Sold at $48,507 plus commission of 17.00%; Final Price $56,753. – 455/215hp, automatic, power steering and brakes, power windows, power tailgate window, wheel covers, roof rack, AM-FM, console cassette stereo, air conditioning, 3-row seating, auxiliary taillights. – Andre Trigano Collection, one owner from new, 19,088 miles. All original but aged, dusty and neglected. Weak chrome. Sound upholstery and interior trim, clear gauges. Sound original paint. Dirty, neglected engine compartment. A strange beast in France but will clean up to be better than it appears today. – This is a simply astounding price, even taking into account the low miles and preservation. Perhaps it was the rarity of this land yacht in France where it will turn heads every time it takes to the road. Its Wide Track design will clog country lanes and require careful navigation and planning in villages or it will become a road block. 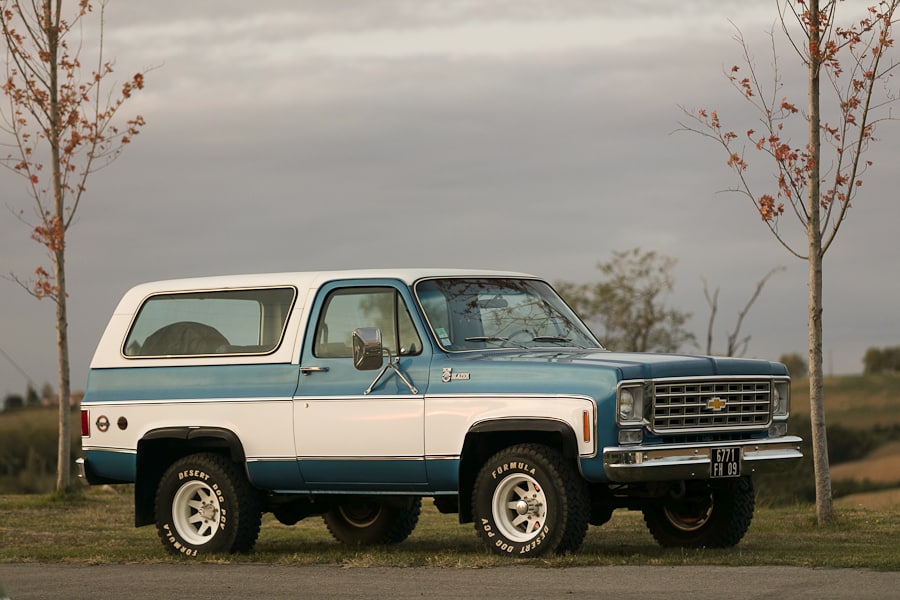 Lot # 234 1976 Chevrolet K5 Blazer Cheyenne Open Top Utility; S/N CKL146F088093; Catalina Blue, White accent and hardtop/Blue vinyl; Estimate $23,662 – $35,493; Unrestored original 3 condition; No Reserve; Hammered Sold at $63,887 plus commission of 17.00%; Final Price $74,748. – 350/160hp V-8, automatic, air conditioning, bucket seats, console, hard bed cover, cruise control, power steering and brakes, Positraction, white rally wheels, tilt steering column, Clarion 8-track stereo. – Andre Trigano Collection, one owner from new, 2,892 miles. all original but stored in a dusty barn, neglected and surface oxidized in the engine compartment and chassis. It will need attention mechanically before it is taken on the road and begs for underhood detailing. – Mecum Auctions had a dozen K5 Blazers at Kissimmee in January. The most expensive of them brought $60,500. A few weeks later Barrett-Jackson had thirteen at WestWorld and two of them brought over $100,000 but they, and several of the others, were over the top custom builds. For a stock K5 Blazer this is a notable result, but not as notable as it seems considering its minimal miles and originality. At least two people in France were determined to take this prize home and while the upside value potential is virtually nil it is appropriately bought even at almost double its high estimate. With plenty of sympathetic attention it could be brought back to nearly showroom condition.