[Copyright ©2003 by Christie’s and the author. Used with permission.]

Estimated by Christie’s at $80,000-$120,000 the “prismatic little Abarth” brought $293,500 with commission. It is being restored in England with careful attention to preserving its exceptional originality, but nothing will equal the thrill of opening this garage door, only three miles from my home, to find the Biposto nestled carefully inside.

ere’s a postscript from Monterey in 2009 and 2010 when the Biposto finally re-appeared after an inconclusive restoration process in the U.K. Click here. 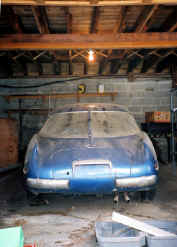 This Bertone-bodied Abarth 1500 Biposto Coupé is the most important barn find in recent history.

It is among the earliest, if not the first, Fiat-based Abarths.

It is Franco Scaglione’s first design for Bertone and the centerpiece of Bertone’s exhibit at the XXXIV Turin Motor Show, April 23 – May 4, 1952.

It is arguably the first design in Scaglione’s masterful B.A.T. series for Bertone.

Unseen in public for some 40 years and only rumored to have survived, it was sympathetically used and preserved for 50 years by Richard Austin Smith, a long-time editor at Fortune magazine.

Although the Abarth 1500 Bertone coupé was not described as a Berlina Aerodinamica Technica when unveiled by Bertone at Turin, its design may explain why Bertone and Scaglione began numbering the famous Berlina Aerodinamica Technica series at B.A.T. 5. The 1952 Turin Motor Show Abarth 1500 Bertone coupé is patently the first in Scaglione’s series of aerodynamic technical exercises, incorporating both concept and details echoed in the subsequent B.A.T.s. It was followed in 1953 by a similar design on a Fiat 1100 chassis which itself was immediately succeeded by the brilliant extravagance of B.A.T. 5 at the 1953 Turin Motor Show.

In retrospect Nuccio Bertone and Franco Scaglione could not have known that their 1952 Abarth 1500 coupé would be the seminal exercise of an immortal series. They would have found it incongruous if not presumptuous to call it the first of a series. A year later, however, the strength of the concept was manifest in B.A.T. 5. This Abarth’s primacy was implicitly recognized in B.A.T. 5’s sequence and in the subsequent odd-numbering adopted for B.A.T. 7 and B.A.T. 9. This extraordinary Scaglione-designed, Bertone-built Abarth 1500 coupé was described in Nick Georgano’s Coachbuilding volume of “The Beaulieu Encyclopædia of the Automobile” as “the coupé he had designed on a Fiat-Abarth chassis in 1952 [which] led directly to the BAT 5, BAT 7, and BAT 9 series of streamlined prototypes….” With the benefit of hindsight, recognizing this Abarth as “B.A.T. 1” is no presumption at all.

Its history subsequent to Turin 1952 is no less extraordinary than its importance in automotive design evolution. 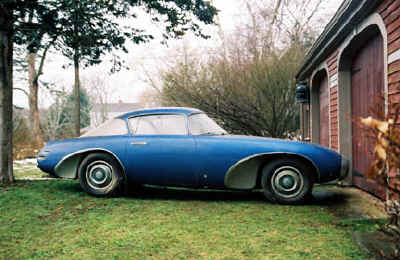 Following the Turin Show it was purchased by Packard and brought to Detroit where it was used in Packard’s design studio. It was spotted and admired there by Richard Austin Smith while on a tour of Packard during research for a Fortune magazine article.

During his visit a new Packard advertising program was described but Packard executives noted there was no slogan for it. Smith made suggestions which were later adopted. In a July 10, 1953 letter James Nance, President of Packard, noting that “I’ve been informed by the engineering department that they have completed their studies on the Abarth foreign car…”, gave it to Smith “to compensate you even though I know that the assistance you gave us was not done with this in mind.” Notations on the original letter, which accompanies the lot, indicate that Smith asked for and received approval from Fortune management to accept Nance’s gift and it was duly shipped and delivered later in July.

Smith apparently responded enthusiastically to the Abarth’s arrival since Jim Nance replied to him on July 29, 1953, “You know, it makes me feel good that the little car means something to you and your family. Quite apart from the personal aspects, I am now sure I could not have done anything better with it.” Richard Austin Smith’s subsequent stewardship of Packard’s token compensation attests to his singular appreciation of its style and significance. At this time of his death he owned only two cars: a 1998 Ford Taurus and this unique Bertone-bodied Abarth. 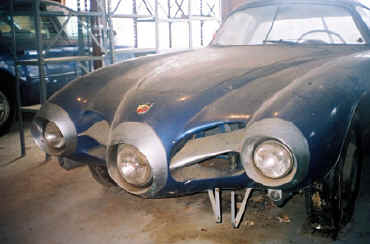 It was not the object of idle possession, either, but was actively used and enjoyed during the Smith family’s ownership. Now showing some 31,926 km, it was a part of the Smith family and is fondly remembered by Richard and Kathleen Smith’s sons for, among other things, the sensation it created when their dad arrived in it to pick them up at school. It was displayed at the Henry Ford Museum’s “Evolution of the Sports Car” exhibit in February 1953 and was one of three cars in a special display at the entrance to the New York Auto Show in the early Sixties.

According to the records of Peter Vack, author of “The Illustrated Abarth Buyer’s Guide”, it is the first Fiat-based Abarth. Its series number, 214, is peculiarly out of sequence, but the date of its construction and introduction is most firmly established.

When Cisitalia fell upon hard times in 1949 Abarth left, taking cars and components as his severance pay. With backing from Armando Scagliarini he established Abarth & Co. and quickly set about supplying the postwar demand for tuning and speed equipment. He raced Cisitalia-based Abarths under the Squadra Carlo Abarth banner to promote the company. A Squadra Carlo Abarth 204 driven by Guido Scagliarini, son of Abarth’s financial backer, won the Italian 1,100 cc sports car championship in 1949. Piero Taruffi captured the Italian Formula 2 championship the same year in a 1,200cc Abarth. Tazio Nuvolari won the Palermo-Monte Pellegrino hillclimb that year, the “Flying Mantuan’s” last race, in an Abarth 204.

When the supply of Cisitalia components ran out Abarth designed his own car, drawing upon his exposure to Ferdinand Porsche’s concepts to create a welded-up platform chassis. The engine and drivetrain came from the new overhead valve 4-cylinder Fiat 1400. Abarth the tuner increased the engine’s displacement to nearly 1.5 liters (variously described as 1,460cc, 1,480cc and 1,492cc) by increasing the bore, bumped the compression ratio to 9:1 and fitted a pair of Weber Tipo 36 carburetors to an Abarth-designed intake manifold. Exhaust flow was promoted by a set of Abarth 4-into-2 tube headers. An unusually short stroke (66mm) engine for the period, Abarth coaxed 5,700 rpm out of its pushrod valve train and extracted an estimated 75 horsepower, 70% more powerful than Fiat’s 1400. 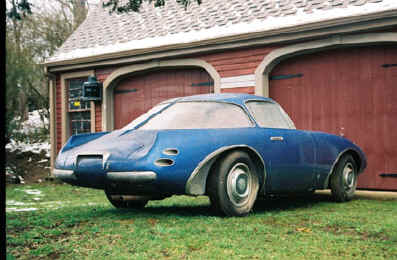 Bertone took on the project of building a lightweight aerodynamic body for Abarth’s chassis. Giuseppe (Nuccio) Bertone had directed the family coachbuilding firm since 1945 and in 1951 he recognized the talents of a young designer, Franco Scaglione. Their first collaboration was Carlo Abarth’s 1500. Introduced at the 1952 Turin Motor Show, it was a sensation, recognized as “Most Outstanding Car” and attracted highly-deserved attention to both Bertone and Abarth.

Scaglione’s design for the Abarth marked a dramatic departure from the designs of the day, a futuristic concept that eloquently expressed aerodynamic concepts that would dominate automobile styling for the next two decades. Bill Graves and Edward Macauley, respectively Packard’s Engineering V.P. and chief designer, had ventured to Turin in 1952 to display their 24th Series 1952 Packard, a styling redesign in only its second model year, and solicit ideas from Italy’s designers. The Packard’s size, however, baffled even Bertone, Ghia and Touring. Graves and Macauley then sought the best example of Italian design they could find at Turin to illustrate their concepts to Packard’s management. They came home with the Scaglione-designed Abarth Bertone Biposto.

Packard was in survival mode at the time and while Graves and Macauley were still in Turin a new President, James C. Nance, was brought in from GE’s Hotpoint appliance group to give renewed direction to the struggling independent. Fortune magazine Associate Editor Richard Austin Smith drew the assignment of profiling Nance and the changes he was bringing to Packard, eventually resulting in the article “Packard’s Road Back” in the November 1952 issue. In addition to the usual corporate analysis, Smith’s article displayed an unusual sensitivity to design and styling. It devoted a full column to the Turin expedition and included a photo of the bemused Jim Nance inspecting Scaglione’s “prismatic little Abarth,” concluding the caption with the observation, “Its value is now largely ornamental; under Nance, Packard styling will stick to lines that are ‘architecturally correct,’ forgo the lunar asparagus.” 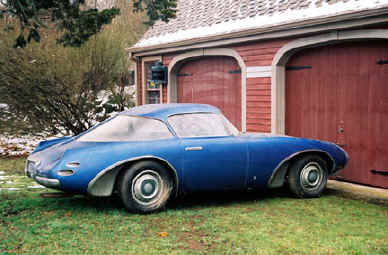 Used gently and appreciatively for some twenty years before it was put up in his dry garage in Connecticut, Dick Smith’s Abarth is as he received it from Packard in July 1953 except for an old repaint in a slightly darker metallic blue that has aged extremely well. Although it was dusty when photographed for the catalog, it wasn’t the dust of thirty years, or even of thirteen. Dick Smith must have looked after his Abarth even as it sat in his garage, unknown to the outside world.

Its Marchal lights appear to be the originals, with a yellow bulb in the large center light. The doors close well and match the body’s lines perfectly. The glass, even the plexiglass rear light, is in excellent condition and the windup door windows work smoothly. The trunk is solid and still contains the spare wheel, tire and jack. The hubcaps shown in its Turin Show photographs are on the wheels and another set of hubcaps, with what appear to be stylized “P” emblems, are in the car. The bright metal trim, so often quickly made and fragile on show cars, is complete and extremely well-preserved. 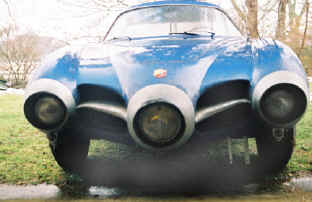 The condition of the engine is unknown. It clearly has not been run in some time. The last registration in the glove box is dated 1977. The brakes are stiff and the tires are badly aged Goodyears which were flat when found but still hold air and appear to have tubes fitted.

Richard Smith kept comprehensive records of his Abarth, including the correspondence from Packard which accompanies the lot.

Neat and remarkable details abound on Richard Smith’s Abarth Biposto, like the marker lamps under the projecting front fenders, the inset “machine gun” taillights and the thin dorsal fin down the center of the rear window. Although the bright headlight surrounds are heavy in appearance and would be supplanted by more sensitive and elaborate treatments on the subsequent B.A.T.s, the split air intake they define is finely developed and sensitively formed. The greenhouse, with its delicately-split wraparound windshield, large rear light and thin pillars, is light and predicts design elements that remain in vogue today. The scooped fender wells, lined here with formed and polished aluminum, are distinctive features that reappear in Scaglione’s subsequent designs for Bertone’s Arnolt-Bristol and Aston Martin custom bodies. 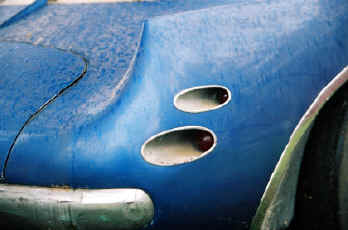 Most distinctive of all, however, are the subtly curving rear fender fins which so accurately foreshadow the extravagant empennage of the later B.A.T.s. Their gentle compound curves are marvels of Scaglione’s sensitivity to air flow and the craftsmanship of Bertone’s artisans.

Richard Smith’s Abarth 1500 Bertone coupé is a singular discovery and opportunity. The first Scaglione design for Bertone, it led immediately to the renowned B.A.T. series, brilliant styling exercises that set a standard of aerodynamic innovation for all subsequent designers. Its Abarth engine and chassis introduced Carlo Abarth’s talents to a wider market. Preserved intact by Richard Austin Smith, this Abarth 1500 Bertone Biposto coupé can be sympathetically cleaned up and mechanically freshened, then displayed in as-found cosmetic condition for headline treatment at the most important concours d’elegance where its true elegance and importance will be enthusiastically appreciated. Then its new owner has the opportunity to restore it accurately and sumptuously to its 1952 Turin Motor Show condition and experience another round of concours and shows.

Click here to return to the top of this page.

Click here to return to the rickcareydotcom index page.