After thirteen months huddled in front of computer screens viewing virtual auctions the trip was liberating.

It wasn’t without trepidation that I set out, but Logan Airport in Boston was calm and organized. Masks were universal, if negligently worn by some. The American Airlines flight to O’Hare was full and American is saving a ton on no inflight food or beverage service. American Eagle from O’Hare to Springfield, MO was maybe a third full and, in a bizarre demonstration of the airlines’ ineffectual seat assignments, I had a row mate – who quickly decamped to a vacant row after they closed the cabin door.

Branson, after twenty years of color commenting on the Branson auction block [it’s really been that long?], is like a second home. Jim and Kathy Cox, auctioneers Brian Marshall and Jeff Knosp, ringmen Marty Hill and Michael Steel, “seller’s ambassador” Kenny Garman, Dawn and Bob Rathgeber in the office and the whole Branson crew are welcoming, inclusive and familiar.

It’s rumored that Brandon and Donna Cox are scheming to re-establish the Candlestick restaurant across Lake Taneycomo from Branson Landing with a Bauhaus-design blockhouse designed to be highly resistant to tornadoes. Bring it on!

We always have a good time on the block, but it was a better time this year when the bidding was quick and cars were loose and selling sometimes on the first bid.

But the real story was the auction.

There were only 169 cars offered but 142 of them sold, an 84% sell-through. The number of cars was the smallest-ever for a Branson sale (in my experience) but the sell-through was the highest ever.

Something like a third of the lots sold brought hammer bids over their pre-sale estimates, no seller grinding required. Up to sixteen lots in a row sold on the block and runs of ten to a dozen consecutive sold cars were common.

Despite the enthusiasm and success prices were generally realistic, but dealers were buying, and paying full retail for good cars.

Conversations with the auctioneers, ringmen and transport people were consistent: This is the pattern since January. Consignments are hard to find and bidders are holding their paddles up for only slightly generous and mostly realistic amounts. As always, solid cars bring solid money.

The collector car hobby, and the exchanges that fuel enthusiasts’ desires to expand and upgrade their collections, is alive and well as Covid-19 confinement relaxes.

Next trip is to Amelia Island in three weeks. There are only two auctions at Amelia this year, Bonhams and RM Sotheby’s, which leaves ample time to peruse and document a singularly attractive and diverse consignment.

Only four cars described … too tired and having a good time catching up with friends and colleagues. 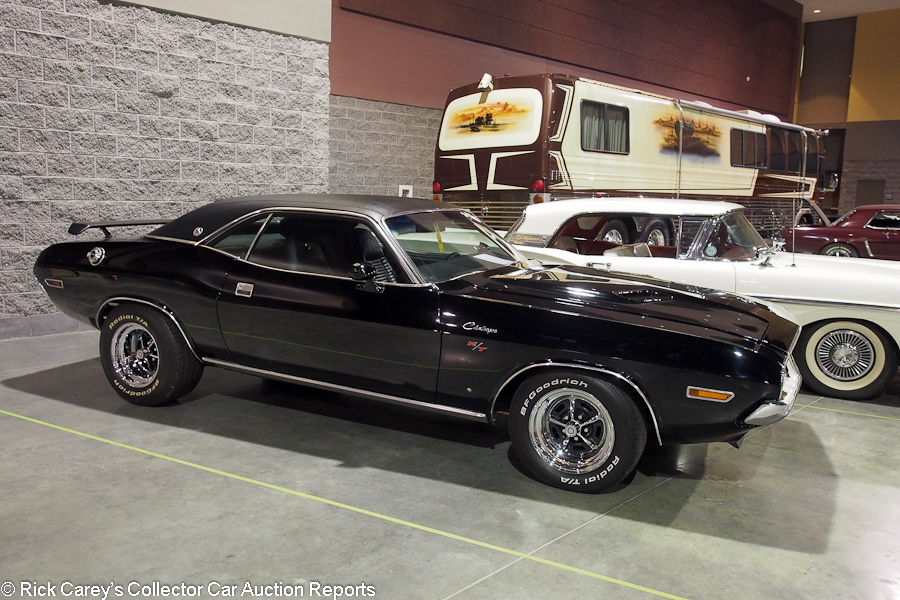 Lot # 552 1970 Dodge Challenger 2-Dr. Hardtop; S/N JS29N0B116786; Black, Black vinyl roof/Black vinyl; Original, modified for competition or performance 3+ condition; With Reserve; Not sold at Hammer bid of $40,000 – 383/330hp upgraded to a 440, automatic, power brakes and steering, NOS equipped, MSD ignition, aluminum radiator, AutoMeter gauges and tach, shift light, dual outside mirrors, Vintage air conditioning, wing, chrome wheels with black centers, Radial T/A tires, dome hood, Hurst shifter. – Fresh mediocre repaint lightly scuffed. Scratched chrome and stainless trim. Road grimy chassis and underbody. Menacing and must be seriously fast, but not what it wants to be. – The NOS plumbing under the hood is neatly laid out and visually impressive but a daunting feature that doesn’t appeal to the older, conservative Branson crowd. It may be just for show but if it’s been used more than a few times the wear and tear on the engine and driveline could be serious. The Branson bidders were duly skeptical. 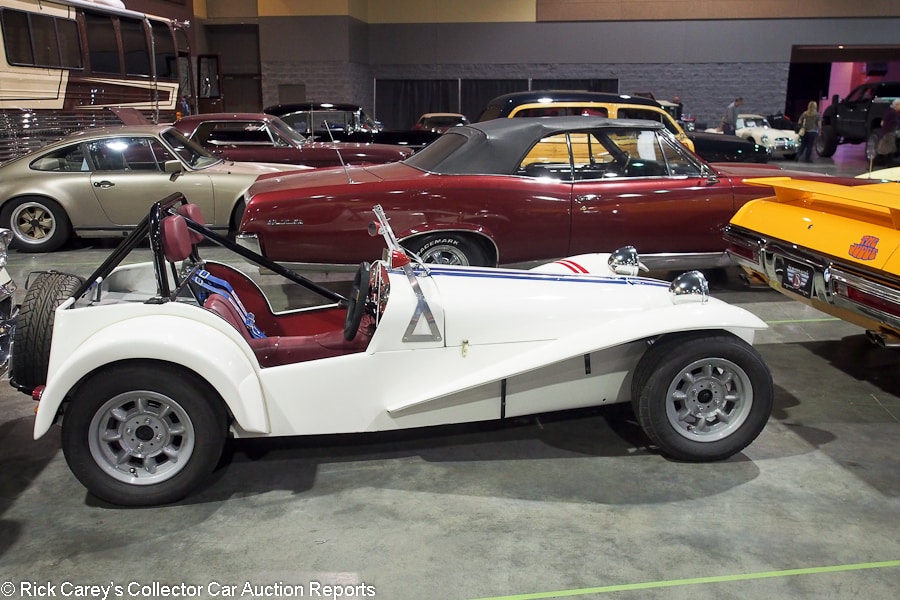 Lot # 556 1962 Lotus Super Seven Roadster; S/N SB1633; White, Blue stripes/Claret leatherette; Competition restoration 3 condition; With Reserve; Hammered Sold at $25,000 plus commission of 10.00%; Final Price $27,500 – RHD. Dry sump 1600cc, dual 40DCOE Webers, Grey painted 13×6 Minilite wheels, Toyo tires, braced rollbar, Sparco leather rim steering wheel, Simpson 4-point belts, fuel cell. – Sound paint with a few stone chips on the rear fenders and a crack at the left front fender support bolt. The engine compartment and chassis are older than the paint and have significant miles. The upholstery is recent and very good. The tach and speedometer are crisp Smiths units, the other gauges and switches are old. A driver’s Lotus. – Offered at Branson Fall two years ago where it sold for $34,100. Came back to Branson Fall in 2020 where it was bid to $23,500 but didn’t sell. It brought a bit more today and was cut loose to find a new home at an appropriate price discounted for its righthand drive but given a bit of a boost by the competent race preparation. 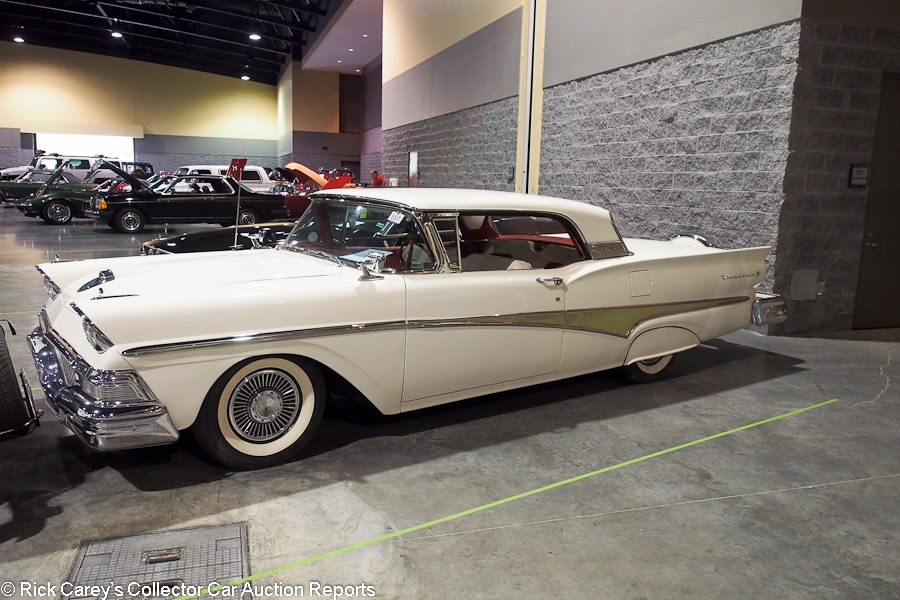 Lot # 557 1958 Ford Fairlane 500 Skyliner Retractable hardtop; S/N H8RW139955; White/White vinyl, Red cloth; Cosmetic restoration 3 condition; With Reserve; Hammered Sold at $42,500 plus commission of 10.00%; Final Price $46,750 – 352/300hp, automatic, power steering and brakes, power windows and seat, cassette stereo, continental kit, wheel covers, whitewalls, dual outside mirrors, skirts. – Repainted assembled with small masking holidays. Decent chrome and stainless but some cast trim is weak. The upholstery is old but sound. Door panels and painted interior trim are original, old and tired. A presentable cruiser with a roof mechanism that is described as working “flawlessly” but was not demonstrated. – While this result is strong for the condition of this Skyliner its eye-appeal is hard to resist. It would have been a more realistic value under $40,000 but isn’t egregiously expensive even at this price. 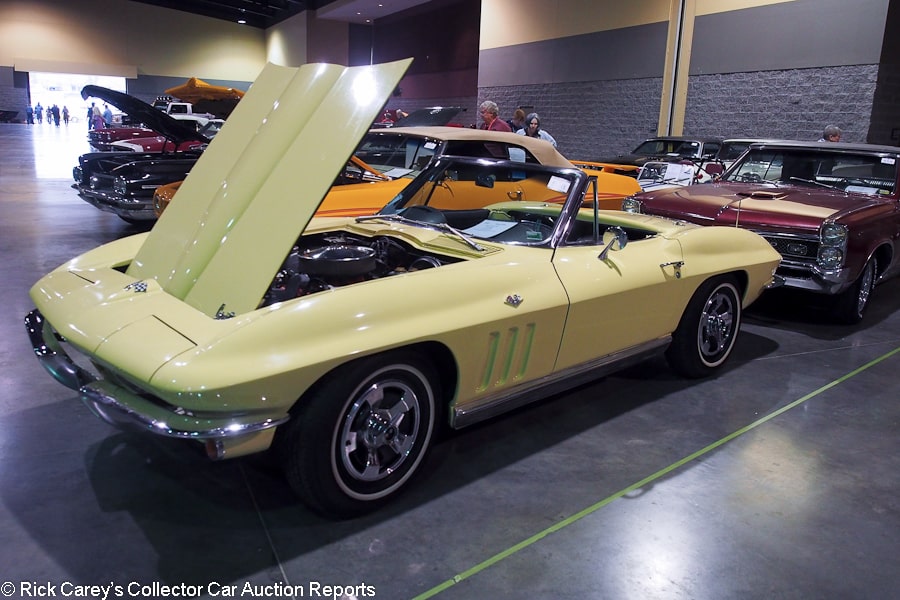