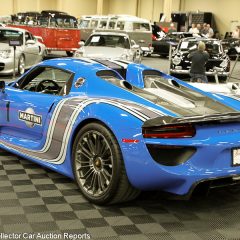 Barely two weeks after Robert Paddock’s shooting rampage from the 32nd floor of the Mandalay Bay hotel Barrett-Jackson returned for its tenth annual auction at the hotel’s convention center. The resilience of the country, the city and car collectors is apparent from the results, the fourth highest in Barrett-Jackson’s history at this venue. A record […]