Bonhams “Legends of the Road” auction is a prime example of the flexibility and effectiveness of “pop-up” auctions in the CoViD era.

There were only six lots, but several were exceptional and all had good stories to tell about collecting, preserving and driving.

Bonhams, to their credit, produced a full printed and distributed catalog, something that was crucial to the many back-stories of the Bugatti Type 57S and Frazer Nash TT Replica.

Reasonably estimated or significantly offered without reserve, the challenge was met when all the “Legends of the Road” lots were sold.

The “Legends of the Road” cars were aimed at enthusiastic collectors with vision for what the cars could be when completed. That they did so well is an endorsement of online collector car auctions and of collectors’ commitment that no great car should be lost.

Here are the numbers, updated with last week’s New York Fed FRB H.10 exchange rate report which at $1.4025 is the highest it’s been in a long time. Put in perspective, though, over half of the auction reports in my database have Sterling exchange rates higher than this. The change in the past two years, however, has been dramatic, from $1.2112 at Monterey 2019 to $1.4025 currently and not an auspicious time to be buying a car in £ — unless, of course, your personal outlook for the US$ is pessimistic in which case “buy now before it gets more expensive.”

Photos are courtesy of Bonhams. 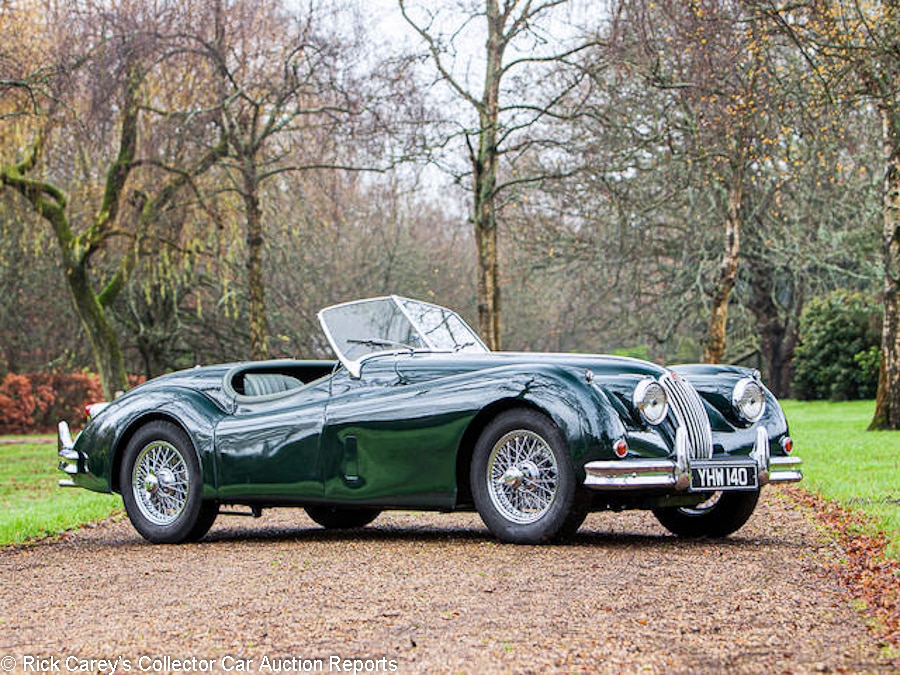 Lot # 101 1955 Jaguar XK 140 3.8-Litre Roadster; S/N 800021DN; Green/Green leather; no top; Estimate $182,325 – $224,400; Modified restoration 3 condition; No Reserve; Hammered Sold at $112,200 plus commission of 15.00%; Final Price $129,030. – RHD. 3,781 replacement engine, HD8 SU carburetors, straight-port cylinder head, 4-wheel XK 150 disc brakes, dual exhaust, Getrag 5-speed, leaf spring traction bars, Reutter bucket seats, chrome wire wheels, tonneau cover, uncovered top frame, original 3,442cc engine (with replacement head) and overdrive gearbox included. – Restored and significantly upgraded from a derelict, completed in 2012. Reproduction rear body, new factory replacement fenders. Good older paint, wavy body panels, sound chrome. The upholstery is good with some stretching on the driver’s seat. Dashboard and gauges are very good. The engine compartment is good but showing age. – An exciting XK Jag, but hardly representative of its model. If this were a Barrett-Jackson auction in the States it would be characterized as a “Resto-Mod”, and it is an attractive one at that. In 1955 a Jag buyer could only dream about owning an XK 140 with this power, handling and braking, let alone a gearbox that had five speeds and synchromesh that actually worked. The mods make it a wonderful driver, and were appreciated by the Bonhams “Legends” bidders even at this below estimate result. 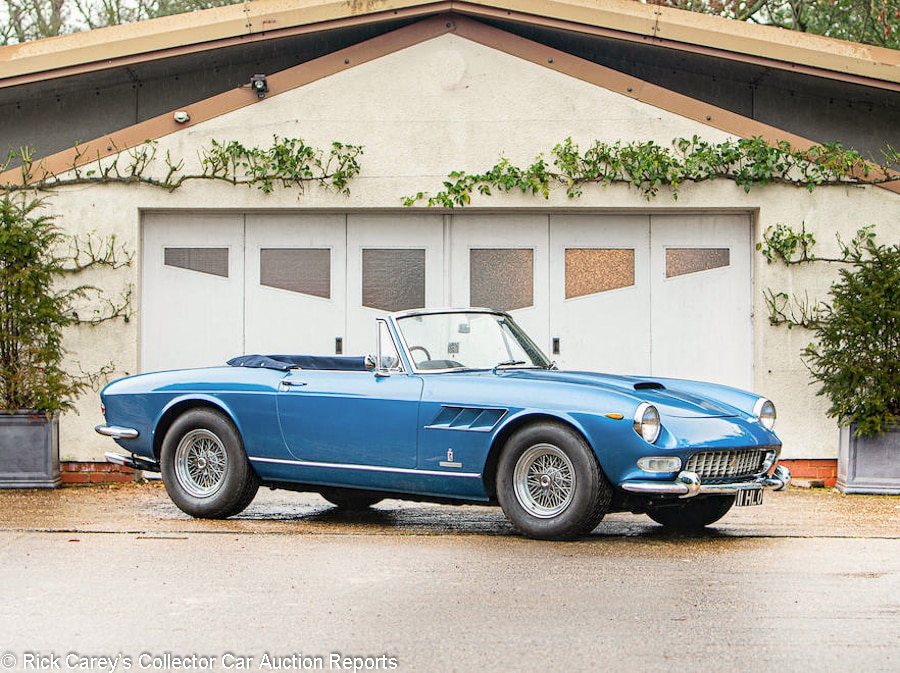 Lot # 102 1965 Ferrari 275 GTS Convertible; S/N 07171; Engine # 07741; Blue Sera/Black leather; Estimate $1,346,400 – $1,683,000; Modified restoration 3 condition; With Reserve; Reported sold but not confirmed. – 3,286/260hp, 5-speed, chrome spoke Borrani wire wheels, woodrim steering wheel. – Modified by a prior owner to a 2+2 coupe (an exercise in destroying value in exchange for utility), returned to its original configuration during the present four decade ownership. Replacement engine. Only 39 photos presented, few if any of them in detail. The gauge faces are dusty. The upholstery is wrinkled. The replacement engine and ANSA exhaust tips call the Ferrari Classiche certification into question. – Sold by the consignor before the auction at an undisclosed price. 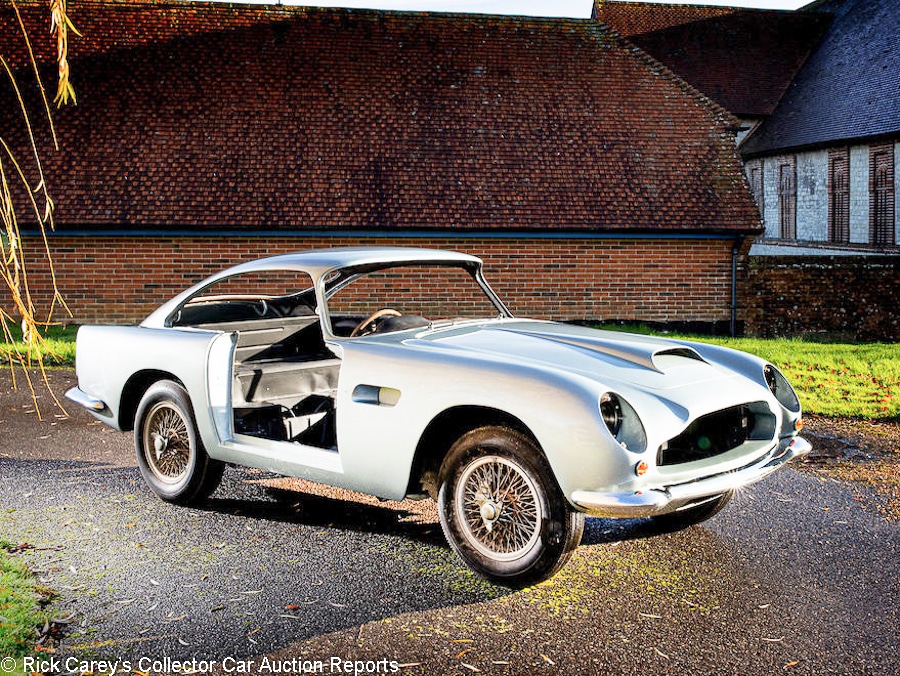 Lot # 103 1960 Aston-Martin DB4GT Coupe; S/N DB4GT0113R; Engine # 370/113/GT; Snow Shadow Grey/None; Estimate $2,664,750 – $3,506,250; Incomplete restoration 4 condition; With Reserve; Hammered Sold at $2,454,370 plus commission of 12.86%; Final Price $2,769,938. – 3,670/314hp, triple Weber carburetors, 4-speed, chrome wire wheels. – Represented as the matching numbers engine and gearbox. Partially restored, from the estate of David Picking. Bodywork, paint and chassis are done, the engine compartment is wired and redone, everything else is uncataloged, in boxes or loose. Accompanied by numerous parts including old, red leather, upholstery and interior trim, the dirty original engine on a stand, the original rear window (no windshield). There are many other parts including exterior trim that have not been restored. Likewise the old, dirty Webers, gauges and gearbox. Very much a treasure hunt puzzle only for the committed and well-heeled. – Having paid this much for this puzzle the new owner is very much committed and reliant upon the skills and competence of a like-minded restorer. The project has more than a small element of challenge built into the price, but there will be an intangible reward at the project’s end both in driving the car and in having saved it for posterity. 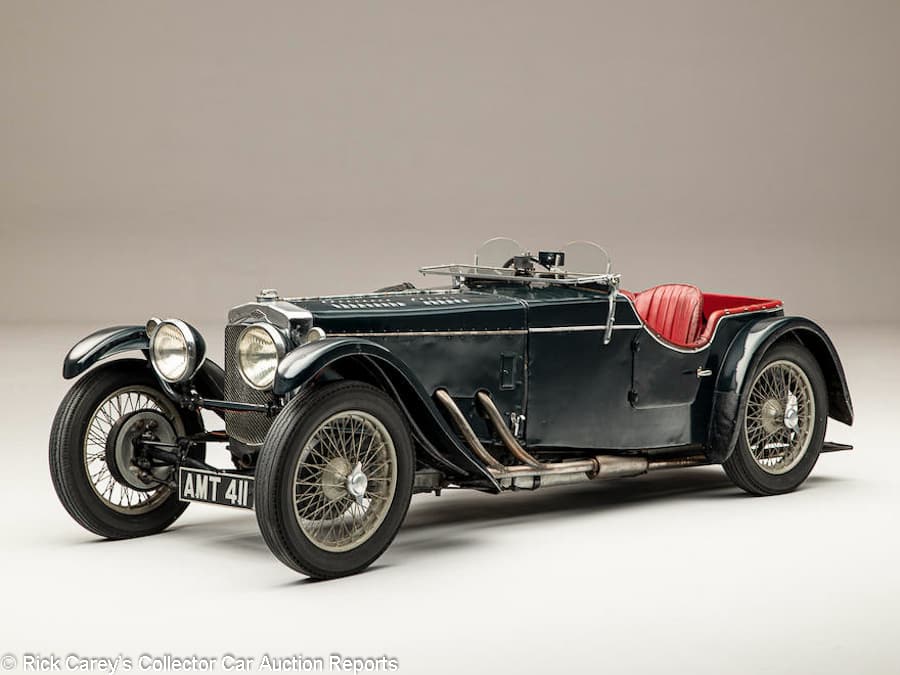 Lot # 104 1934 Frazer Nash TT Replica Roadster, Body by AFN Ltd; S/N 2109; Black/Red leather; Black top; Estimate $280,500 – $350,625; Unrestored original 4 condition; With Reserve; Hammered Sold at $308,550 plus commission of 15.00%; Final Price $354,833. – RHD. 1,496/68hp Meadows inline four, dual SU carburetors, 4-speed chain drive, wire wheels, folding windshield, dual aeroscreens, fishtail exhaust, outside exhaust head pipes, single sidemount spare. – Meadows 4ED engine replacing the original Blackburne. First delivered to Hugh Hunter with five subsequent owners, most recently the late Ian Trainer who bought it in the early 1960’s. Trainer raced and toured it extensively with accompanying photo and other documentation. Sound old paint, worn, creased old upholstery, grubby carpets, dirty engine. Dormant since the early naughts but highly original, recently recommissioned but stated to need a clutch, electrical wiring, attention to correct low oil pressure, wheels and tires. – It may need a lot, but a nut-and-bolt restoration would obscure the plain history of the car apparent in its dirt, grime and wear. This ‘Nash is a great example of a category that collectors these days line up for: old and scruffy but still amenable to being driven and largely complete. In this case a clear history and excellent provenance add further value. Both the buyer and the seller did well in this case. 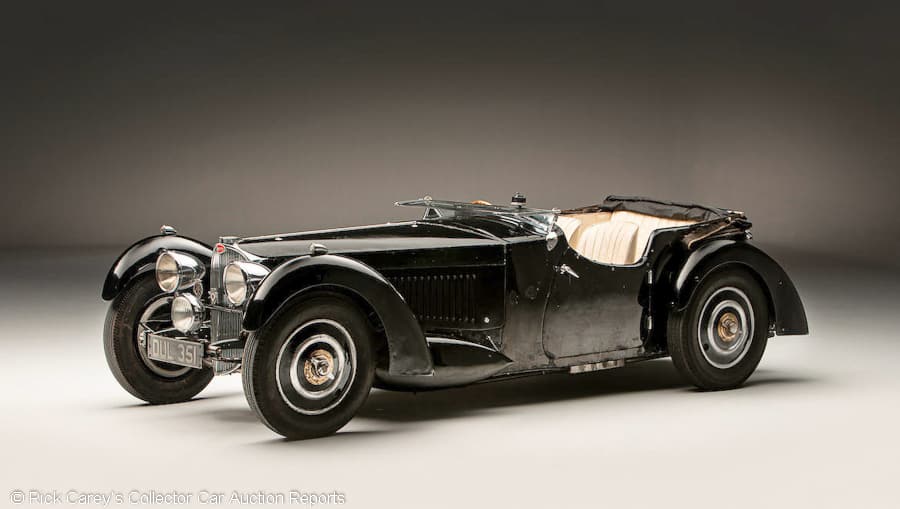 Lot # 105 1937 Bugatti Type 57S Sports, Body by Corsica; S/N 57503; Engine # 16S; Black/Biscuit leather; Black cloth top; Estimate $7,012,500 – $9,817,500; Incomplete restoration 3- condition; No Reserve; Hammered Sold at $5,049000 plus commission of 12.42%; Final Price $5,675,918. – RHD. 3,257/160hp, 4-speed, single right side spare, wheel discs, folding windshield, Scintilla headlights, fog light, full (but scruffy) weather equipment. – Based upon frame rails from one of the underslung (“Surbaisse”) Bugatti Type 57G “Tanks”, original Corsica coachwork, an incomplete restoration following 51 years of dedicated ownership by the late Bill Turnbull who strove to establish its history and evolution. Originally delivered to Sir Robert Ropner, later owned by Rodney ‘Connaught’ Clarke, H.H. Coghlan and Dr. Kenneth Cock. Repainted original coachwork with fenders returned to the original profile, professionally preserved old upholstery, partially rebuilt engine. A work in progress but delightfully and passionately preserved. Completion and final assembly will not be straightforward but 503’s history and the process of its resuscitation is voluminously documented and the result will be sublime. – Despite heavy emphasis on the origin of the frame rails (but not crossmembers) in one of the Type 57G Bugatti Aerodyne “Tanks” a less charitable view might be that Bugatti was employing leftover parts to make “new” cars. Be that as it may, Type 57S s/n 57503 has a marvelous history and has been treated to a meticulous mechanical restoration. It is incomplete in so many ways, but Bill Turnbull’s meticulous attention to mechanical detail promises good results and the original Corsica body is nothing if not well-preserved. It is a credit to both the Turnbull estate and Bonhams that it was offered without reserve, appropriate in the case of a car that is unique. Its challenge is that it was never quite good enough for the fastidious engineer Bill Turnbull and never got “done”. The bidders made up their minds with this GBP 3.6 million ($5.0 million) hammer price and there are more pounds or dollars to be spent unravelling its restoration history and completing it. 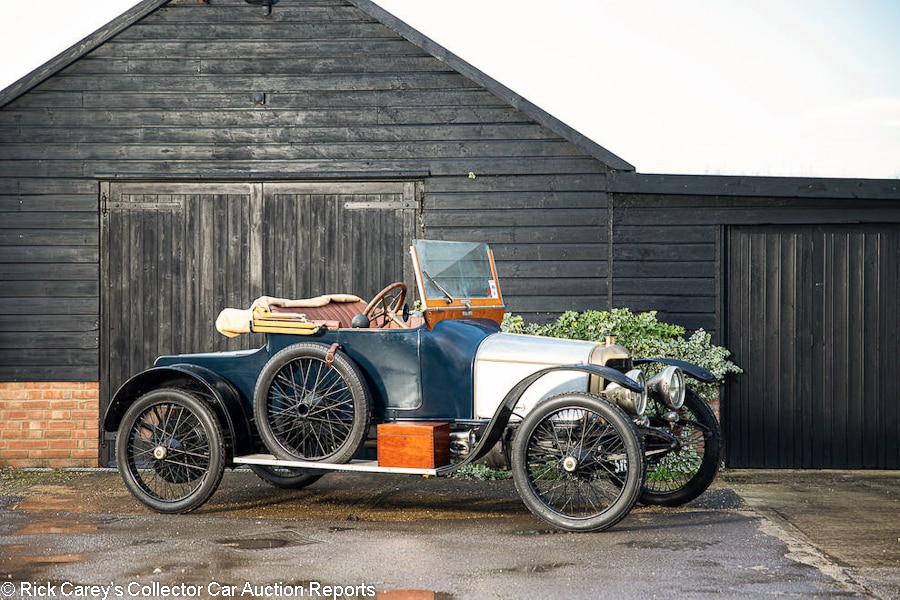 Lot # 106 1913 Panhard et Levassor X19 2.2 Litre Runabout; S/N 35738; Engine # 35738; Blue, Aluminum hood/Brown leather; Beige cloth top; Estimate $56,100 – $84,150; Older restoration 3+ condition; No Reserve; Hammered Sold at $39,270 plus commission of 15.00%; Final Price $45,161. – RHD. 2,155/12 RAC hp inline four, 4-speed, black wire wheels, folding windshield, single right side spare, bulb horn, electric headlights, vacuum windshield wiper. – Acquired by Bill Turnbull in 1954 in New Zealand. First owned by Miss E.G. Gardner (later Mrs. E.G. Williams) in 1914. Subsequent owners are documented to Bill Turnbull. Restoration began in 1997, completed in 1998. Thoroughly documented and developed over years by Bill Turnbull for reliability and performance. Paint and brightwork are dull. The upholstery is sound but creased from use. Good wood trim, windshield frame and dashboard. A charming and usable old car with an exceptional history. – It’s not Brighton Run eligible, nor does it have a competition history. What it has is a remarkable provenance, the charm of its diminutive form and the quality of early 20th century French automobiles which led the world in their design innovation and exquisite manufacturing. This is a great little car with a charming history that will give its new owner satisfaction with both the car and the price paid for it.