Based upon the first three years of the Audrain Newport Concours & Motor Week (to give it its full name) a long-term plan is being implemented and, despite its events being scattered across the Aquidneck Peninsula east of Narragansett Bay, it is taking on a welcome cohesion. Central to the theme is the contribution that the Northeast made to the motor car’s development a century ago and the motoring accomplishments of Newport residents like Willie K. Vanderbilt to early 20th century competition.

Newport, Rhode Island, is a tourist destination. It has the magnificent “cottages” built by financial and industrial barons of the late 1800’s and early 1900’s. It has the tightly-packed winding streets of a colonial American port city. It has destinations for tennis (Motor Week is centered at the International Tennis Hall of Fame) and yachting. There are ocean-front vistas. And it has stores, shoppes (sic) and all manner of [good] food. A few days in Newport is almost invariably well-spent.

Unlike Monterey, it might be added, which has magnificent over-priced dining and dreadful traffic.

Oh, but Newport has even narrower streets and dreadful traffic, too. You will get lost driving around Newport.

The Audrain Newport Concours & Motor Week is worth the trip, and getting better every year.

But back to Bonhams, because this is an auction report.

Motor Week is in its third year. Bonhams Audrain auction is in its second year. The behind the scene machinations and negotiations are a mystery, but what had been announced as a Gooding & Company auction at inception was realized as a Bonhams auction in 2021. Nevertheless, the enthusiastic Bonhams Motoring crew is a sympathetic fit for Motor Week

There isn’t a lot of space in the indoor tennis court that sites Bonhams and the 44 cars that made up this year’s auction were about as much as it can contain without becoming overcrowded.

19 of the 44 lots offered (excluding pedal cars, if you please) are reported here by Rick Carey. 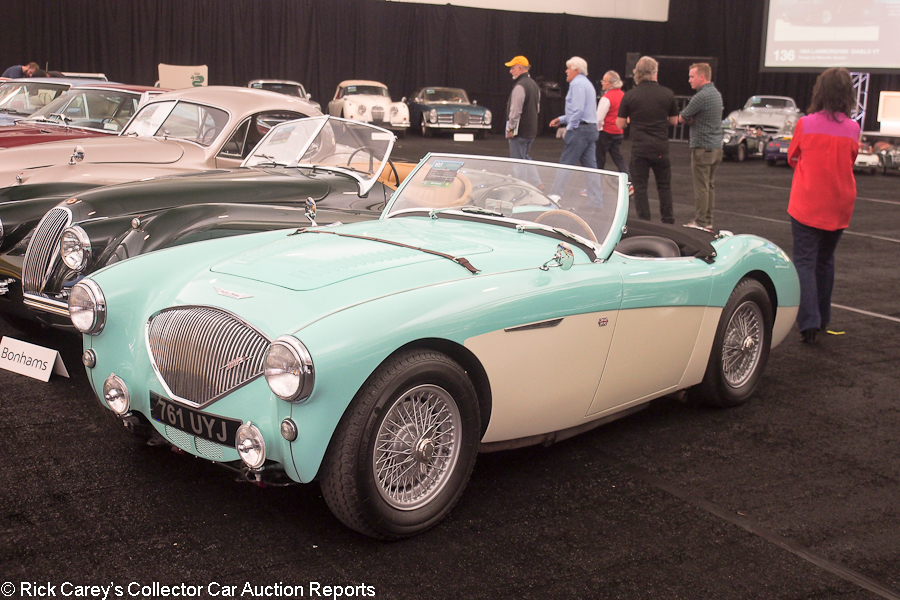 Lot # 105 1956 Austin-Healey 100/M Le Mans Roadster; S/N BN2L233047; Engine # 1B233047M; Florida Green, Ivory/Black leather; Black cloth top; Estimate $160,000 – $190,000; Older restoration 3+ condition; Reserve; Not sold at Hammer bid of $127,500. – 2,660/150hp, 4-speed, overdrive, Moto-Lita woodrim steering wheel, silver painted wire wheels, Vredestein tires, dual fender mirrors, no bumpers, Lucas driving lights and rear fog light, Monit rally timer, hood strap, louvered hood, BMIHT and 100M Le Mans Registry Certificates. – A factory built 100/M Le Mans, originally lefthand drive, represented as numbers-matching. Restored in the UK in 2008. Good older paint, chrome and interior. Touched up nose stone chips and a small crack by the trunk corner. Scuffed cowl where the windshield folds. Clean underbody. A nice example with some age and miles on the restoration including the 2015 Mille Miglia in 2015. – Offered by RM at Monaco in 2018 where it was bid to $173,290 (Euros 145,000 at the time, this result in today’s fading Euros is 130,300.) Well-maintained and attractive in Florida Green, it’s worth more than the reported high bid here, but not as much as the 2018 Monaco bid. Exchange rates matter and this 100/M Le Mans is on the wrong side of the curve. 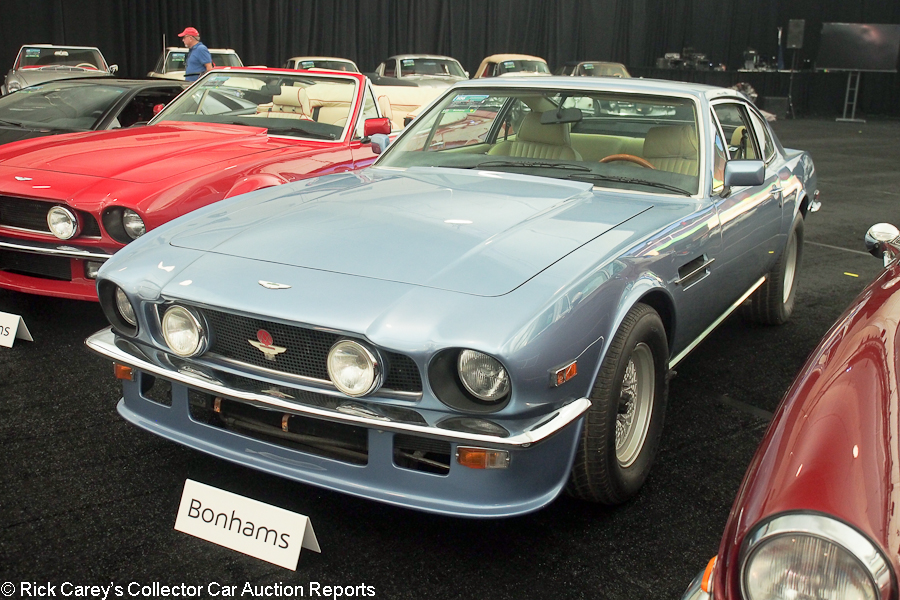 Lot # 106 1986 Aston Martin V8 Coupe; S/N SCFCV81S7GTL12520; Engine # V5852520LFM; Winchester Blue/Beige leather; Estimate $120,000 – $180,000; Unrestored original 3 condition; No Reserve; Hammered Sold at $250,000 plus commission of 12.00%; Final Price $280,000. – 5,340/315hp, 5-speed, sunroof, Sony stereo, woodrim steering wheel, BBS alloy wheels, Goodyear tires, built in telephone. – Upgraded to Vantage specs and cosmetics after the initial purchase. Edge chipped doors. Stone chipped nose. Lightly stretched and worn upholstery. Clean original underbody. 12,434 miles from new. – A bidding contest with some 42 bids on the phone and in the room. It blew through its estimate range in short order even though it hasn’t been run in some time. The fascination it generated is impossible to fathom and this result at double the reasonable pre-sale estimate is fantastic. It is not going to be inexpensive to take it from a lump to a runner, a cool car but woefully expensive to the phone bidder who bought it. 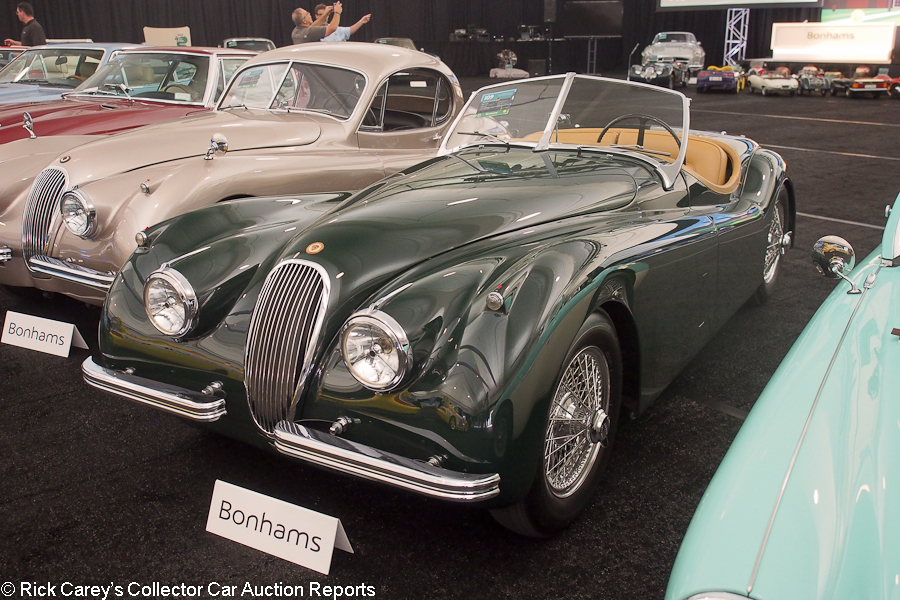 Lot # 109 1954 Jaguar XK 120SE Roadster; S/N S674747; Engine # F1765-8S; Dark Green/Biscuit leather; Black cloth top; Estimate $130,000 – $160,000; Older restoration 2- condition; With Reserve; Hammered Sold at $110,000 plus commission of 12.00%; Final Price $123,200. – 3,442/180hp inline six, 4-speed, chrome wire wheels, Avon tires, Lucas tri-bar headlights, JDHT certificate documented. – Very good paint, chrome and interior. Orderly underbody and chassis. The windshield header is scratched from the top. Orderly engine compartment with little use but some age. An older restoration with little use and good care. Represented as the matching-numbers engine block. – Sold by Gooding at Pebble Beach in 2015 for $220,000 with a little over 1,300 miles added to its odometer since then. It has deteriorated since then, but not as much as this result would indicate and is very good value for the money in this transaction, an XK 120 SE that is more than good enough to tour and show on weekends. 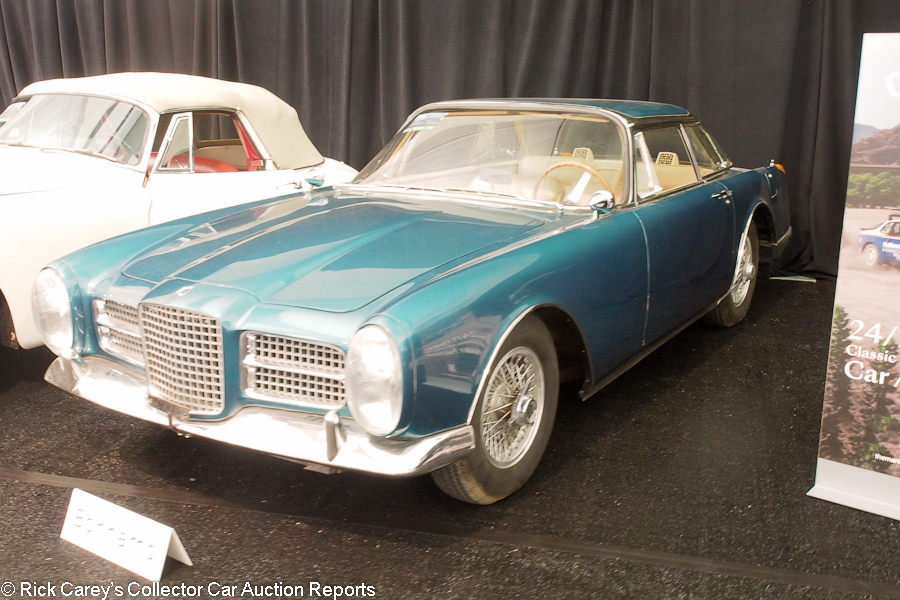 Lot # 110 1963 Facel Vega Facel II Coupe; S/N H2KA186; Engine # TY8712203; Metallic Blue/Beige leather; Estimate $140,000 – $180,000; Visually maintained, largely original 4 condition; No Reserve; Hammered Sold at $105,000 plus commission of 12.00%; Final Price $117,600. – 383/335hp, single 4-barrel carburetor, automatic, chrome wire wheels, Michelin X tires, Marchal headlights, power windows, power steering, air conditioning, woodrim steering wheel. – Poor old repaint with abundant flaws and damage. Surface creased old upholstery. Dry, stiff and cracked body and window seals. Dirty wheels. Tired and in desperate need of some attention after nearly a decade on static display. – Facel IIs are expected to be dual quad 355hp cars but this one has only a single 4-barrel and its condition begs for attention which will soon morph into a full restoration in the way these things happen. The price it brought, however, takes that into account with all (or at least most) of the uncertainties hedged and the result here makes sense for both parties. 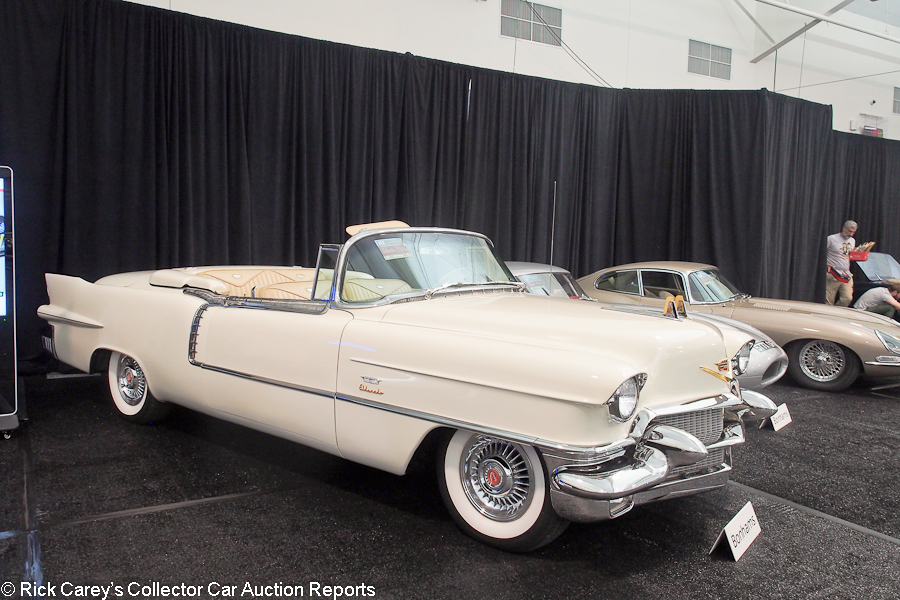 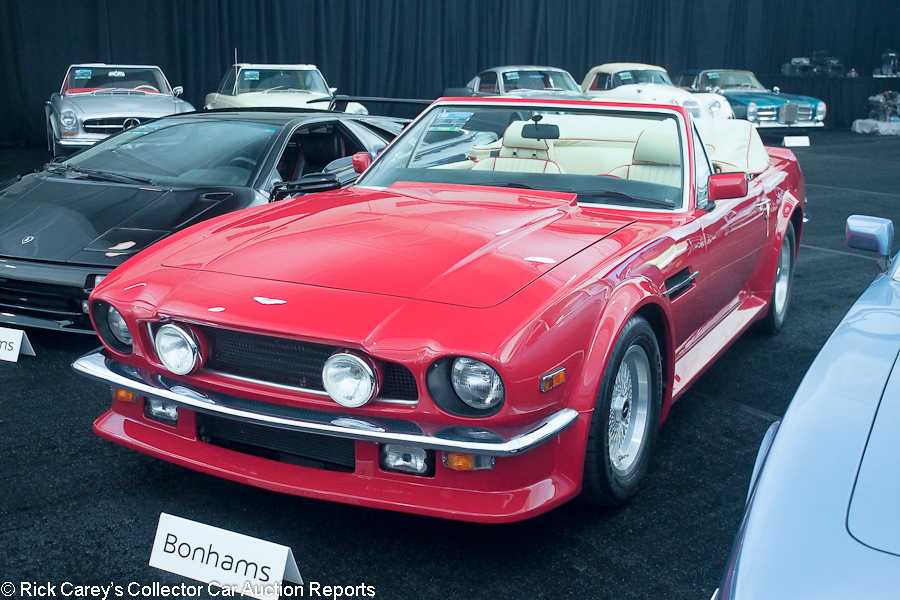 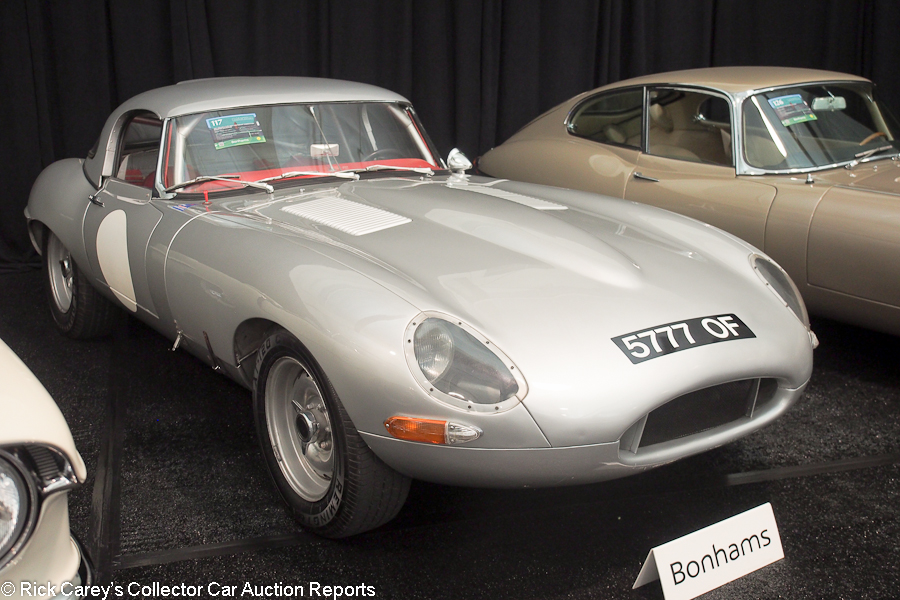 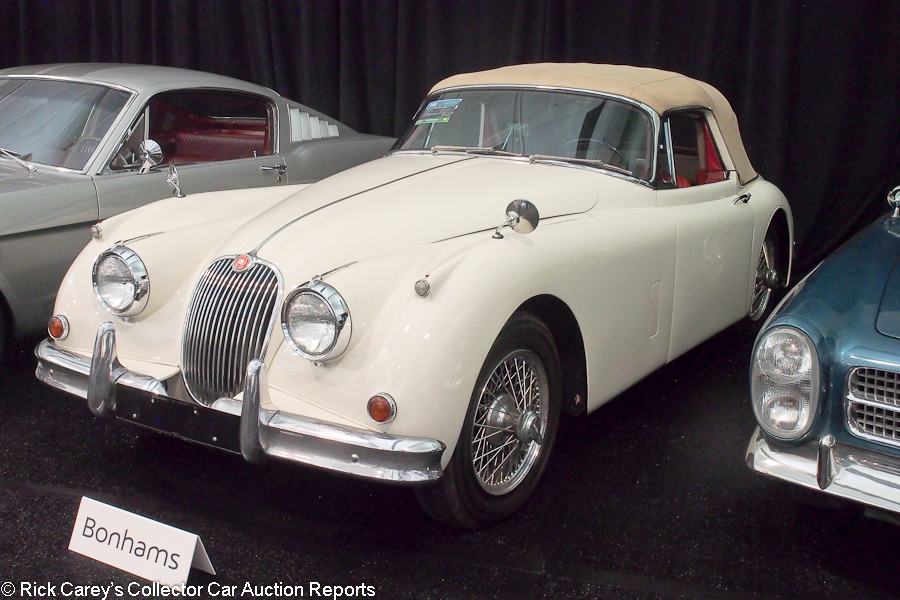 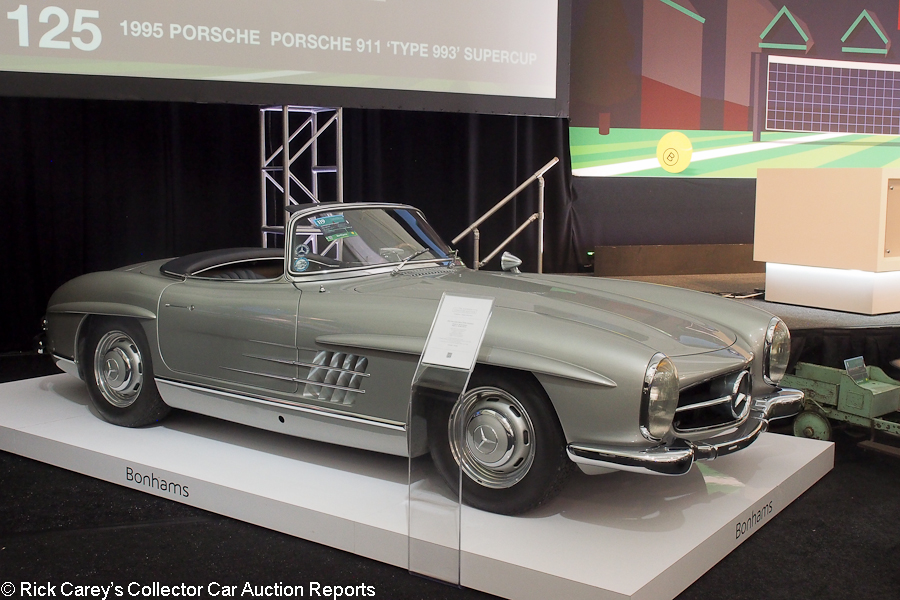 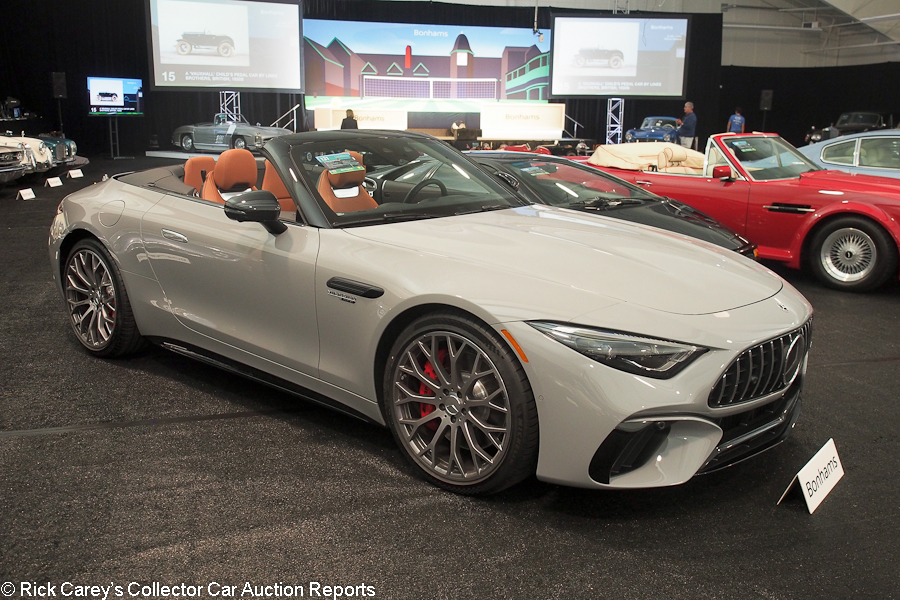 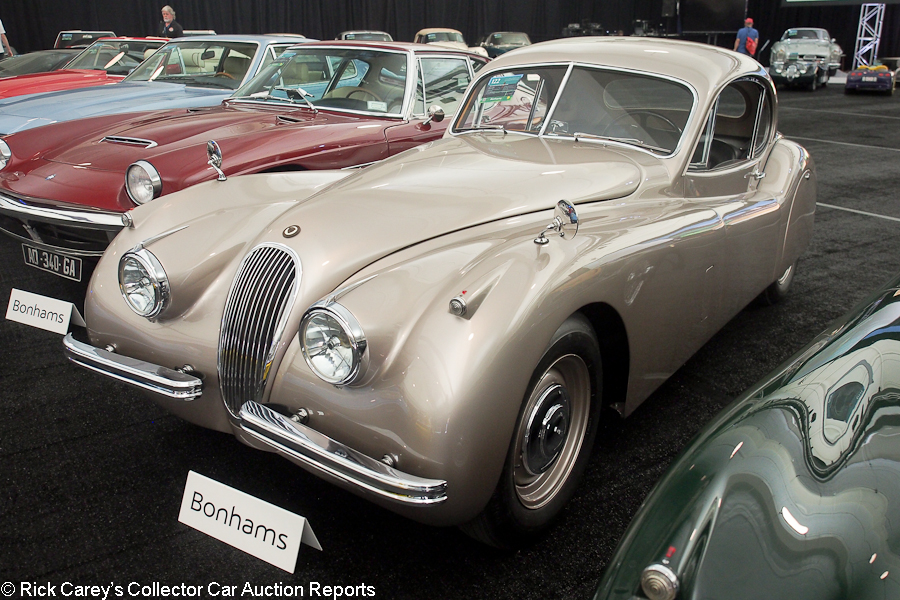 Lot # 122 1953 Jaguar XK 120 Fixed Head Coupe; S/N 680893; Engine # W7726-8; Champagne Gold/Black leather; Estimate $100,000 – $130,000; Older restoration 3+ condition; With Reserve; Not sold at Hammer bid of $92,500. – 3,442/160hp, 4-speed, body color steel wheels with chrome hub caps, blackwall tires, dual wing mirrors, skirts, wood dash and window trim, locking filler cap, tool kit, JDHT Certificate documented. – Represented as the numbers-matching block and cylinder head. Clean engine bay. Very good upholstery, interior wood and chrome. Excellent paint aside from an inch-long star crack behind the passenger window. Restored fourteen years ago and very lightly used and well-maintained since. – Sold at Auctions America’s Ft. Lauderdale auction in 2015 for $115,500, then at RM Auburn Fall in 2021 for $82,500, this is classic XK 120 FHC style in a sound and presentable package. It might deserve a better price than this, but this bid is substantially more than it attracted at Auburn last year and could have been sold with no regrets. 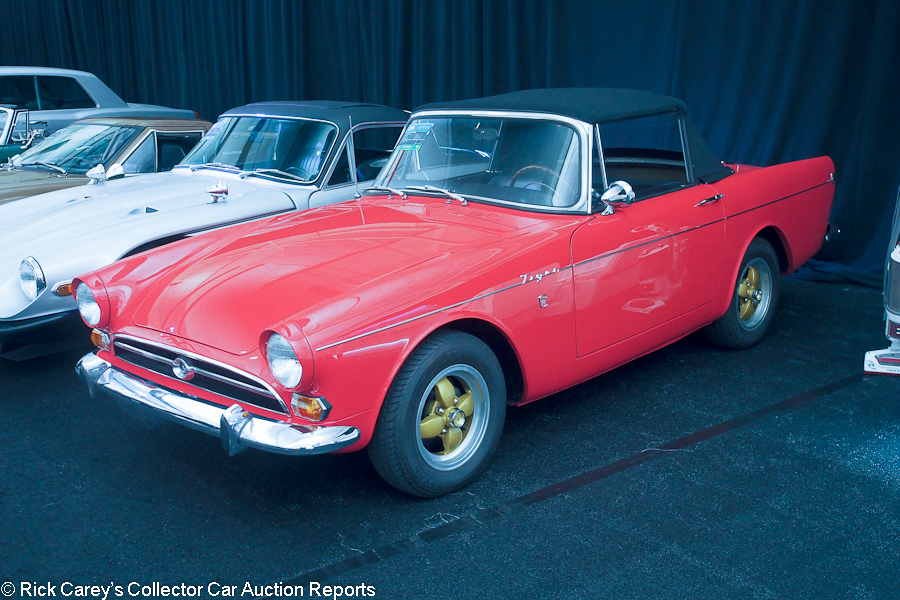 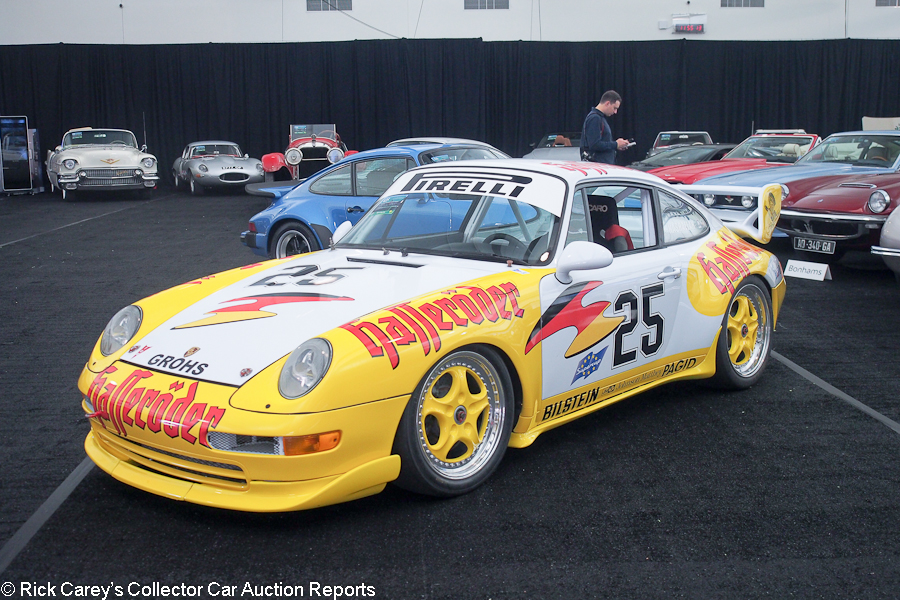 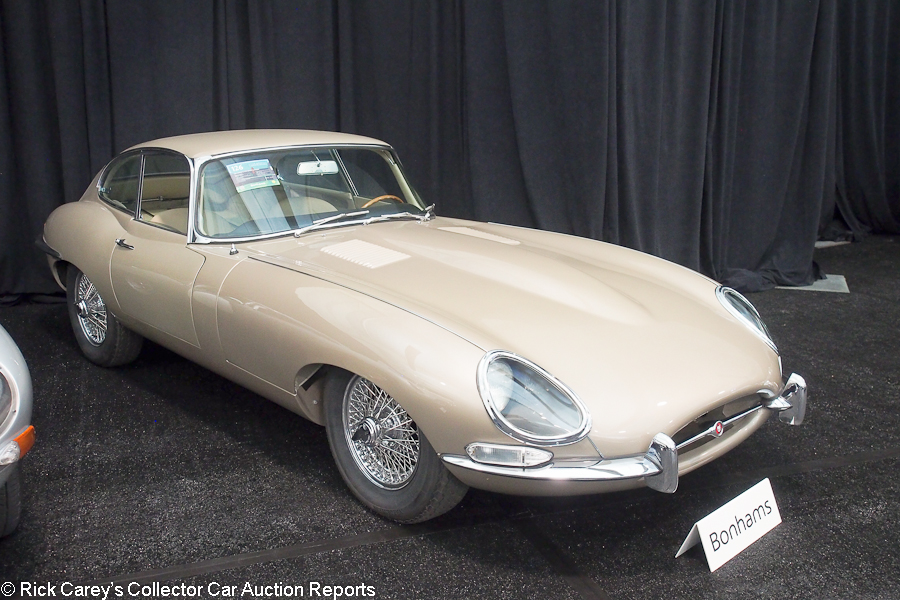 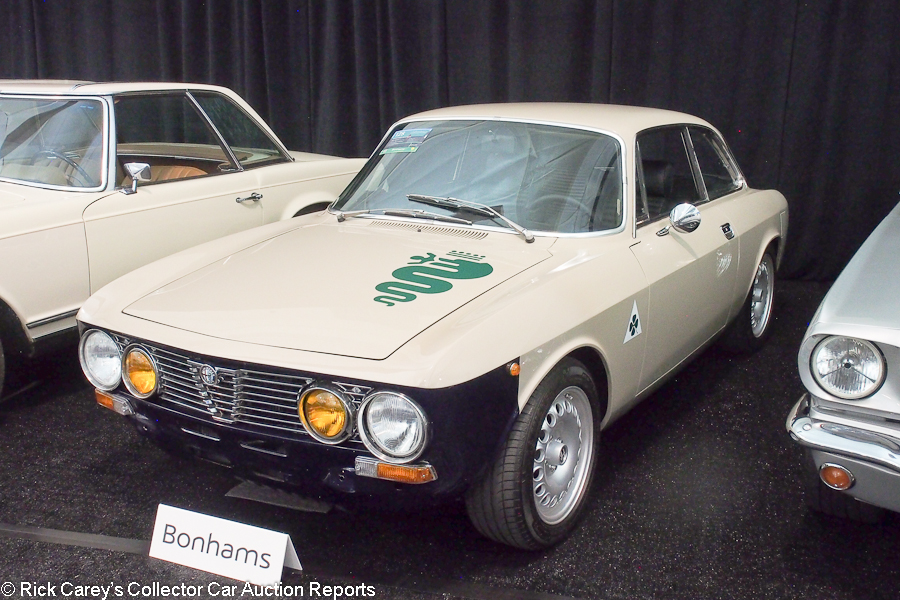 Lot # 128 1974 Alfa Romeo 2000 GT Veloce Sprint, Body by Bertone; S/N AR3024419; Quarry Beige, Blue nose apron/Black vinyl; Estimate $55,000 – $75,000; Modified restoration 3+ condition; No Reserve; Hammered Sold at $65,000 plus commission of 12.00%; Final Price $72,800. – 1,962/145hp, dual 45DCOE Webers, limited slip axle, fuel cell, alternator, 4-piston disc brakes, Konis, Eibach springs, urethane bushings, 15″ Campagnolo style alloy wheels, Michelin tires, Prototipo leather rim steering wheel, Stack tachometer. – Clean, orderly engine compartment. Good clearcoat paint with a few small flaws. Good upholstery, glass and gauges. No bumpers. Driving out of the preview it displayed the “thud, thud” of an Alfa’s short induction tract, just as it should. – This is a dream car. It’s not original, it doesn’t purport to be original, but it has all the stuff anyone could ever want in a GTV, competently and thoughtfully done. (Does it show that I like GTVs and am not afraid of making them better?.) With stock GTVs bringing near, and even over, 6-figure prices this is a sincere value. 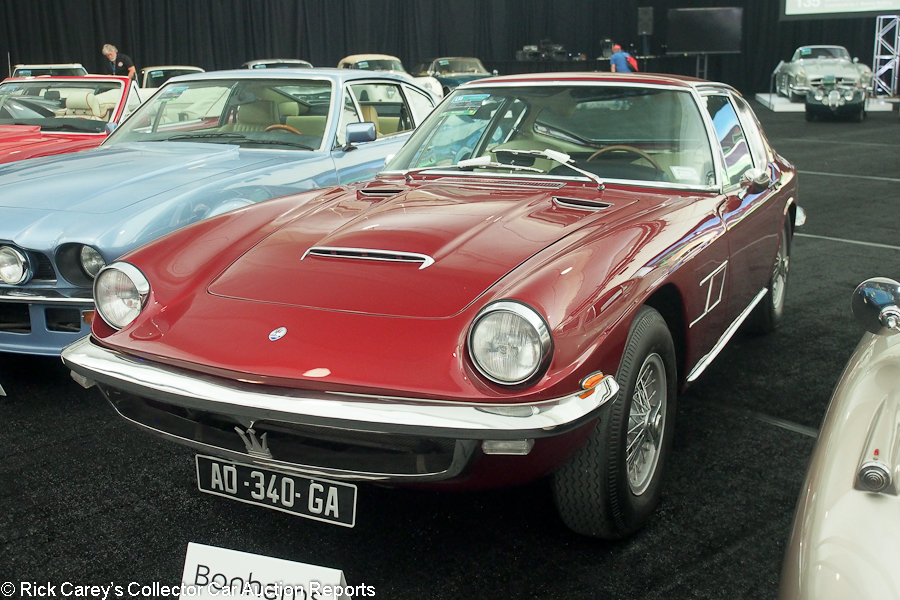 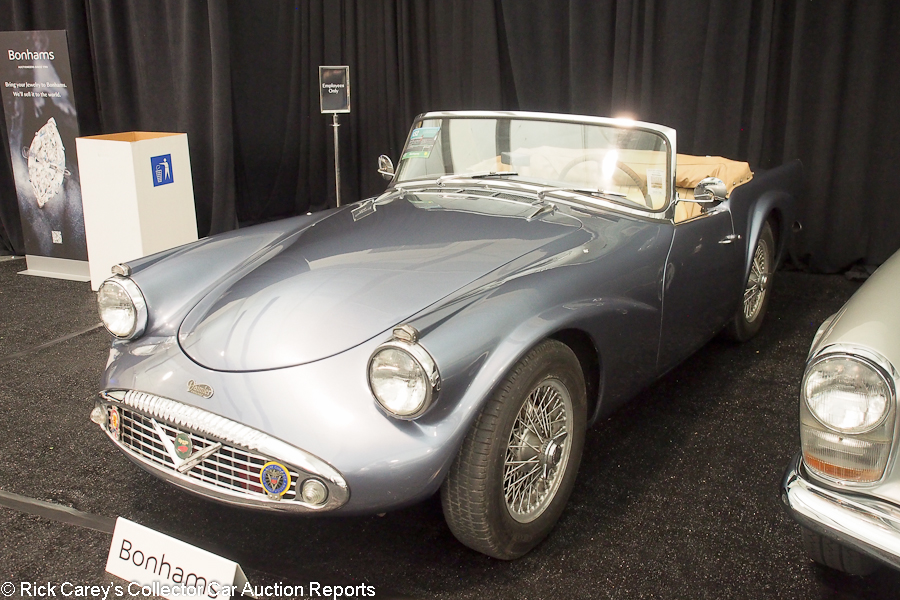 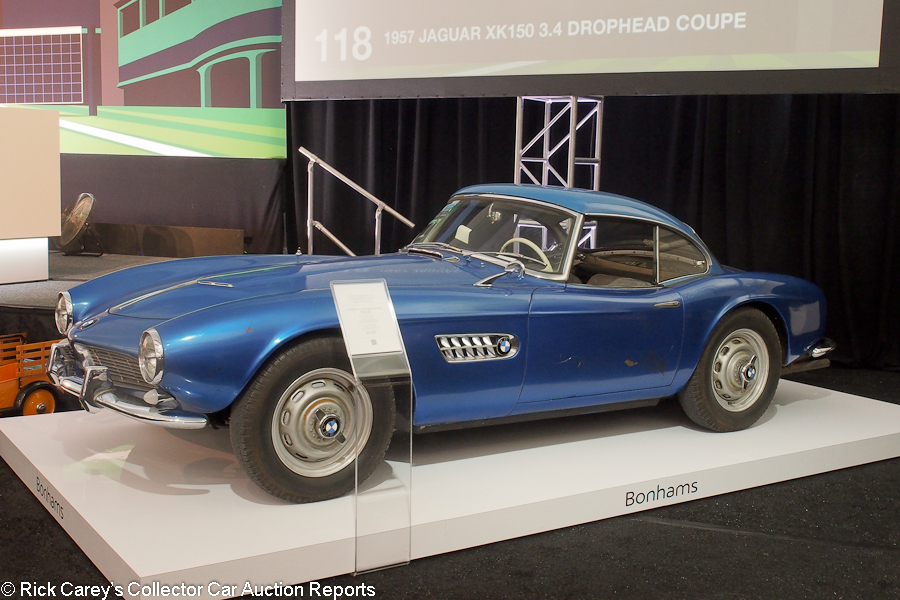 Lot # 133 1957 BMW 507 Convertible; S/N 70059; Engine # 40072; Bright Blue, Bright Blue hardtop/Grey leather; Black cloth top; Estimate $1,800,000 – $2,200,000; Unrestored original 4 condition; No Reserve; Hammered Sold at $2,100,000 plus commission of 10.24%; Final Price $2,315,000. – 3,168/150hp V8, 4-speed, Rudge centerlock wheels, Pirelli tires, two tops, multiband radio, tool kit, owner’s handbook and bill of sale to Herman Bold. – Awful, peeling, blistering old repaint. Worn, discolored upholstery with a pulled seam on the driver’s seat cushion. Aged and tired barn find but sound and complete. Video introduction in the barn and at Lime Rock, an important barn find from a shed in Philadelphia where it has been secreted since it was acquired by Herman Bold in 1979 for $22,000 43 years ago. – This is a rat. It also is a wonderful rat, started from time to time and driven out of its shed under its own power after decades in limbo. It got the Audrain collectors’ juices flowing, but they couldn’t match the phone bidder who bought it. Now the new owner is going to have to decide what to do with it having paid generously but not egregiously for the privilege of owning it. 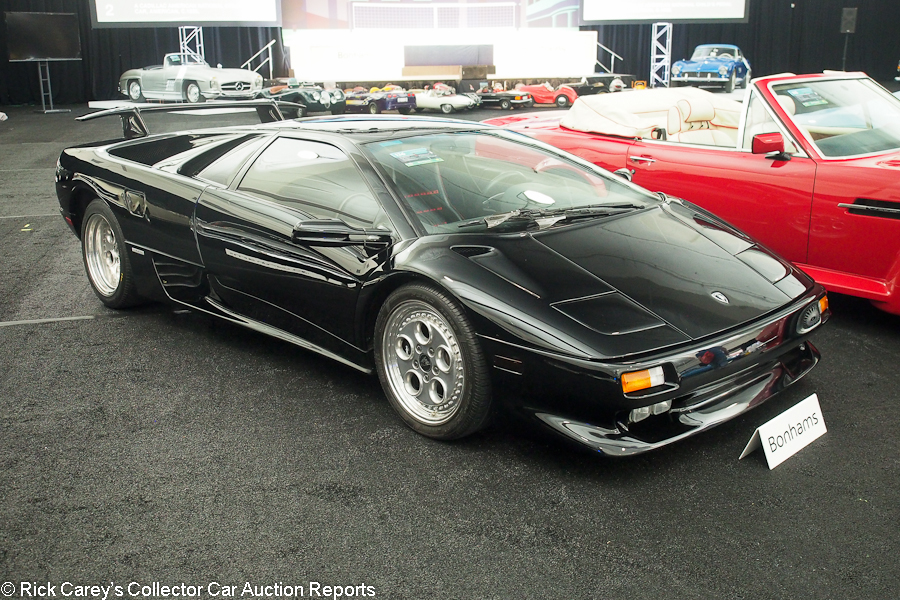