This description appeared in the catalog for Bonhams all-Ferrari auction at the Palace Hotel, Gstaad, Switzerland, December 20, 2002. Images of the catalog pages are used by permission. © 2002 R.S. Carey and the auction company.

The Daytona is the last front-engined, V12-powered gran turismo from Ferrari. Its front-engined design demonstrated Enzo Ferrari’s reluctance to abandon tested and proven concepts even as competitors adopted mid-engined designs. Its performance and reputation over the generation since it was introduced in 1968 has demonstrated Ferrari’s wisdom. A classic Ferrari in all respects, the Pininfarina-designed, Scaglietti-built Daytona’s styling is long-hooded and aggressive. Powered by a 352 horsepower version of Ferrari’s classic V12 engine with six 40 DCN 20 Weber carburetors, dual distributors, dry sump lubrication and dual overhead camshafts, the Daytona utilizes a 5-speed transaxle and fully independent suspension with unequal A-arms, coil springs and tubular shock absorbers. 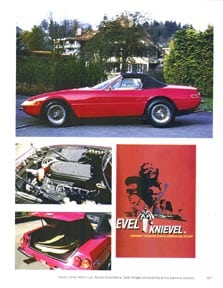 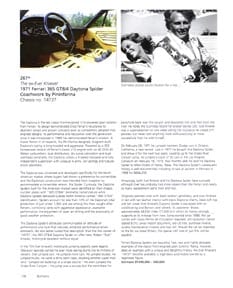 The Daytona was conceived and developed specifically for the North American market where buyers had shown a preference for convertibles and the Daytona’s construction was intended from inception to accommodate a convertible version, the Spider. Curiously, the Daytona Spiders built for the American market were identified on their chassis number plates with “365 GTB/4” berlinetta nomenclature while Daytona Spiders delivered outside North America carried “365 GTS/4” identification. Spiders account for less than 10% of the Daytona’s total production of just under 1,300 and are among the most sought-after Ferraris, combining rarity with aggressive appearance, awesome performance, the enjoyment of open air driving and the practicality of good weather protection.

The Daytona Spider’s attributes communicated an attitude of performance and style that naturally attracted performance-driven extroverts. No one better suited that description than the first owner of the 1971 365 GTB/4 Daytona Spider on offer here, Robert “Evel” Knievel, motorcycle daredevil without equal.

In the 70’s Evel Knievel’s motorcycle jumping exploits were legends. Television specials carried his ever more daring stunts live to millions of viewers. Evel jumped cars. He jumped more cars. He jumped busses. He jumped trucks. He wore a shiny satin cape, recalling another super man who “jumped tall buildings at a single bound.” He even jumped the Snake River Canyon – the jump was a success but the wind blew his parachute back over the canyon and deposited him only feet from the river. He holds the Guinness record for broken bones (35). Evel Knievel was a supersalesman (in one week selling life insurance he closed 271 policies) but never sold anything more enthusiastically or more successfully than he sold himself.

On February 28, 1971 he jumped nineteen Dodge cars in Ontario, California, a new record. Later in 1971 he bought this Daytona Spider and drove it for the next two years. Leading up to the Snake River Canyon jump, he jumped a stack of 50 cars in the Los Angeles Coliseum on February 18, 1973. Two months later he sold his Daytona Spider to Mike Dodds of Dallas, Texas. The Daytona Spider’s subsequent history is well documented, including its sale at auction in Monaco in 1988 for $684,200.

Amazingly, both Evel Knievel and his Daytona Spider have survived, although Evel has probably had more repairs than the Ferrari and nearly as many replacement parts (liver and hip).

Ferrari Daytona Spiders are beautiful, fast, rare and highly desirable examples of the classic front-engined gran turismo. Rarely, however, does an example with a unique and delightful history like Evel Knievel’s 14737 become available, a legendary automobile owned by a legendary figure.