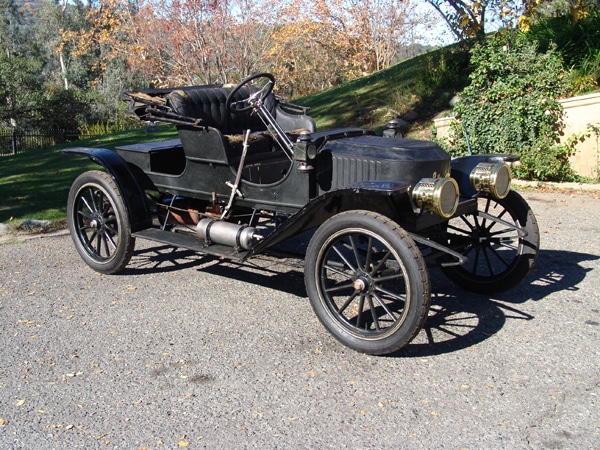 Fred Buess was passionate about steam power. As a boy he kept a daily diary from 1907 through 1918. In those pages he recorded the steam locomotives that passed through his home town of Kempton, Illinois, by number and wheel arrangement. Not surprisingly he wangled rides in the locomotive cabs from a number of railroad engineers. His accounts of those experiences ring with the enthusiasm of a young man enamored with the seemingly limitless power and possibilities of steam.

In that he had much in common with the Stanley brothers.

Identical twins born in Kingfield, Maine, Francis Edgar and Freelan Oscar Stanley were possessed of that clever inventiveness known as Yankee ingenuity. More innovators than visionaries, they could size up any machine or process and figure out a way to do the job better, and most often with amazing simplicity. In the late 19th Century they turned their talents to the growing field of photography, and invented a process for making glass negative plates much faster and less expensively than the then-current state of the art.

Having made a small fortune from the photographic dry plates, the brothers, known far and wide as “F.E. and F.O.,” had the wherewithal to indulge in a few hobbies including the automobile. As was their habit, they felt they could do it better. Their first car, finished in September 1897, was technologically like most other steam automobiles of the time, but extremely light. The tubular chassis frame was built by a bicycle manufacturer. The engine, built by a machinist friend of F.O.’s in Maine, weighed only 19 pounds. The stroke of genius, however, was the boiler, a lightweight fire-tube design wrapped with three layers of piano wire for strength. With it the Stanleys could operate their steamer at much higher steam pressures, and therefore greater efficiency, than any other steam car.

The brothers had hardly begun manufacturing, however, when they were made an offer they couldn’t refuse. John Brisben Walker, owner of Cosmopolitan magazine, was enamored of the nascent automobile industry, and wanted to be part of it. He badgered the Stanleys with ever-increasing offers until they agreed to sell. With money from investor Amzi Lorenzo Barber, the “Asphalt King” who had made a fortune paving streets in the nation’s cities, Walker paid the Stanleys $250,000 for the business and employed them as managers. Within months the Stanley steam car became the Locomobile, then spawned a near copy in the Mobile steamer when Walker and Barber quarreled and split. The Stanleys, being of independent spirit, found they didn’t like working for others and quit the company in the autumn of 1899.

F.E. and F.O. had agreed not to re-enter the automobile business until the spring of 1900. They kept tinkering with their design and in the summer of 1901 introduced the new Stanley steamer. Slightly larger than the Locomobile, it had a redesigned engine that worked at even higher pressure: 350-400 psi, unheard of at the time. Patent litigation induced them to change the one feature of their car that most closely fell under the disputed claim, the drive chain tensioner.

Their Yankee ingenuity reigned once more with their ingenious solution: they dispensed with the chain entirely, mounting the two-cylinder engine horizontally and geared directly to the rear axle. They employed a similar technique for the rest of the make’s 30-year run. They also moved the boiler out from under the seat to the front. The round boiler required some type of hood, and here again form followed function with a bonnet shaped like the component it covered. With the introduction of the new Model D Stanley in 1904 the “coffin nose” had arrived.

A larger engine and boiler allowed the Model D to claim a 10 horsepower rating, as opposed to the 6.5 and 8 hp of the earlier runabouts. (Steam horsepower is a function of both engine and boiler size, and is not directly comparable to horsepower ratings of internal combustion engines.) For 1905, a 20 hp Model F, with a larger engine and boiler and longer wheelbase, was introduced. It was the basis for more sporting models like the Gentlemen’s Speedy Roadster. Yet more power was developed for a racing car that set the world’s land speed record at Ormond Beach, Florida, in 1906. This powerplant, rated at 30 hp, was used in larger vehicles like the nine- and twelve-passenger Mountain Wagons, as well as the Model K Semi-Racer.

Still, it was the 10 hp cars that were the bread-and-butter models through 1915, amounting to some 40 percent of all production. Light and maneuverable, they were well suited to all work except the transport of heavy loads in mountainous territory.

For 1910 the 10 hp Stanley cars were completely revised. The engine was increased in size and strengthened. The wheelbase was extended to 104 inches, and metal fenders replaced the earlier leather mudguards. Cars were now given numerical designations, and the 10 hp cars had 60-series nomenclature. The Model 60 was a two-seater (with single or double rumble, fixed or folding rear seat or none at all). Model 61 was a four-passenger toy tonneau. Yet the basic price, $850, remained unchanged. By the standards of the day it was a bargain.

Although he became a highly respected mechanic of internal combustion cars, Fred Buess’s car collection began and ended with steam cars. In 1927 he purchased an incomplete 1900 Locomobile Surrey, still owned by the Buess family, and put in storage in Michigan before moving to California. A year later, he bought a 1913 Stanley touring for $25. Then came a 1910 Model OO White, a 1909 Model O White and a 1909 Model M White Limousine.

In 1937 he heard about this Stanley roadster owned by a Czechoslovakian immigrant. Its owner found its operating pressure terrifying and had never run it, even though he was only the second owner and the car was in excellent order. Fred bought the Stanley along with a Model B Oldsmobile for $300.

His son recalls that the two cars looked almost brand new, with shiny black paint, beautiful gold leaf striping and excellent brass and leather. They were almost completely original, and incredibly well maintained. The car has optional large 25” wheels which contribute to its good looks. In those Depression years Fred was a night mechanic earning forty dollars a week and his wife took on laundry work to help pay for the cars.

Despite the fact that he owned a number of Whites and several other Stanleys this Model 60 was Fred’s favorite steam car. He loved it for its agility, toy-like behavior and astounding acceleration. In fact, he felt this 10 horsepower car accelerated better than his 20 hp Stanleys due to its lighter weight. It was literally capable of pulling stumps, according to the elder Buess, because it developed maximum torque at stall. One of the seventeen founders of the Horseless Carriage Club of America in 1937, Stanley #5332 was the car with which Fred Buess attended most of the Club meets between 1937 and 1946. About that time his attention turned to restoring one of the Whites and the Stanley did not run again until 2010.

The boiler has been recently hydro-tested, and the car put in running order. A new Bourdon boiler, designed to accept the original superheater tubes, was purchased a few years ago and is included with the car. The burner was restored at that time. The seat leather and top fabric show some deterioration from the long storage, but overall the car has cleaned up very well and is entirely presentable to drive and enjoy as is.

Unrestored Stanleys from this era are not unknown, but none has been so carefully preserved or has such an intriguing history. This is a very rare chance to acquire an unmolested example.

Sold for $80,505 including commission, a serious bargain, even if it’s not eligible for the London to Brighton Veteran Car Run.