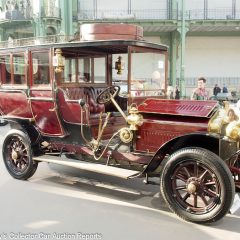 The Grand Palais is fantastic, a vast high ceiling glass roofed spectacle with ornate ironwork (visible in the background of some of the shots of the cars) where early automobile shows were held at the beginning of the 20th century. Nowhere was the history of the Grand Palais more clear than at Bonhams auction this […]